Dinner at the Secret Restaurant 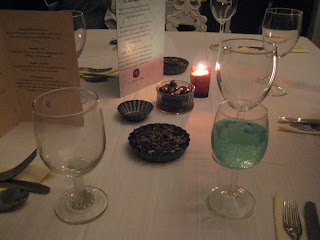 Some of you might hace noticed that I really love food. I'd guess that about 25% of the posts on this blog are about food. I'm lucky that the Irishman loves food just as much as me, if not more, and we like to eat food and find new places to eat food together. So when we read this article in The Guardian about underground restaurants, we knew we had to check one of them out.

We decided to go to Ms Marmitelover's home restaurant in Kilburn. When you buy tickets (seats go fast for the secret meals, served only on Saturdays), some nights are themed and I was intrigued by "Astrology Night" – a menu based on the stars! The Irishman, being the affable chap that he is, agreed it would be cool. Well, cool might not be his exact word but he was interested nonetheless.

Ms Marmite doesn't post her menus in advance. She is a vegetarian, but sometimes serves fish. You don't know where the restaurant is located until you get your email confirmation, and it comes with a secret password for entry. The Irishman and I were extremely excited all day yesterday, and the Irishman even Twittered Ms Marmite for a recommendation of a pub to go to pre-dinner. She obliged with The Black Lion on Kilburn High Road, excellent pub with a nice fireplace, and we set off on our culinary adventure!

A few G&Ts for me and pints for him later, we rushed up the road to Ms Marmite's - her email confirmation said not to be late - and entered with our password. Ms Marmite's daughter is usually the waitress, but she was off last night. Instead, a nice rockabilly couple hosted and served, and they greeted us with a lovely blue cocktail that had little squishy blue pearls made out of Curaçao liquor. Delicious!

Our hosts directed us to sit anywhere we liked, and we ended up sitting at an empty table and hoped it would be filled with interesting people. As we waited for dinner service to commence, we nibbled on a savory seeds mix and it dawned on us that actually Astrology night was for astrologers. I'm still not sure if we were the only "laypeople" in attendance, but our table eventually filled with an assortment of astrologers: Enid, a heavy metal bassist and astrologer; Kim, who specializes in an older form of astrology; and a very nice Turkish woman whose name I forgot. They told us all kinds of cool things about our charts (the Irishman learned his rising sign!) and gave us their astrological opinions on the global financial crisis and new world order.

Then the food was served. We started with an absolutely delicious spicy Thai soup, accompanied by homemade focaccia. That was quickly followed up by goat's cheese on black lentils. YUM. Because Ms Marmite's restaurant is, well, illegal, she doesn't have a liquor license. But she does have raffle tickets (£10 each) for winning wine, and funny enough, we won every time we played (and we played a lot – the Irishman and I are not feeling so great today). We drank white wine with these courses, and switched to a quite a nice Bourgogne red for the balance of the meal. A spicy rocket salad with roasted peperonata came out next, and finally the house specialty: finely sliced potatoes with real cream.

I think both the Irishman and I were a bit skeptical about vegetarian cuisine (inspired by the stars, at that) but we were both pleasantly surprised by the variety and the flavors. Ms Marmite followed up her deliciously heavy potato dish (I don't want to think about how much of that cream is now on my hips) with some sort of light as air fruity mousse concoction. It was the perfect compliment to the main course, fresh and delightful. The meal closed with a trip outside to Ms Marmitelover's front garden where the Chocstar van was parked to pick up a slice of really amazingly thick chocolate cake.

We left Ms Marmite's around 11:30pm, tipsy and sated. My final verdict was that she is a clever lady, with a seriously good eye (tastebuds?) for flavor. I told the Irishman that Ms Marmite's home was exactly what this American always thought a London home would look like – quirky decorations and rambling charm. The company was fascinating and warm, and we had a really great time. I will definitely go back to Ms Marmite Lover's - especially since the Irishman reported that Ms Marmite has been Tweeting that she might do a marmite-themed menu. OMG - bring it on!
posted by Danielle at 1:51 PM

Email ThisBlogThis!Share to TwitterShare to FacebookShare to Pinterest
Labels: Food