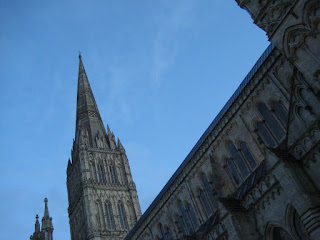 Last weekend the Irishman and I drove west to the town of Salisbury, which is near Stonehenge. I'd been there before, in 1999 on my first trip overseas, and did the usual tourist stops of the Salisbury Cathedral and of course Stonehenge. We went there for 3 reasons:

2. So the Irishman could run a half-marathon as part of his training for the London Marathon

3. To visit the Irishman's friends who live there, and kindly hosted us

Salisbury is an old Roman town, with a long history of settlement and inhabitation that dates back to the Iron Age. The cathedral that now stands in the center of the older part is one of the most important examples of Gothic architecture in Western Europe. Lots of famous people are buried in it, like a former Prime Minister and relatives of Jane Seymour (wife of Henry VIII).

We drove down on Saturday and wandered a bit around the town, visiting both the cathedral and a cookery shop. Both were fascinating. When I first saw the cathedral, it was mostly covered in scaffolding but this time around a lot of the scaffolding had been removed. We wandered through the cathedral and monastery, but missed seeing the Magna Carta (there are four remaining copies, and the Salisbury Cathedral is home to one of the better preserved copies). Back home, the boys played some video games and I drank tea.

After a lovely, carb-loading meal for the runners, Sunday morning saw the ladies hiking up a hill in the New Forest watching out for the boys who were running 14 miles up and down hills of rough terrain. Not that we weren't paying attention, but I was mostly interested in the New Forest ponies, a breed of wild ponies that inhabits the New Forest and roams around its territory. They're all about 3.5-4 ft tall (12 hands?) and stand by the side of the road eating grass. I loved them! They were much more exciting than the mud-splattered runners passing us by.

After showers, we all retired to a pub for a lovely Sunday roast before we had to return to London. The ride down and back was lovely, not only because this particular part of the English countryside is so pretty (and it is) but because once you leave the suburbs of London (which go on for miles), it really is completely different: houses with 2 chimneys and thatched roofs and winding narrow lanes. It is nearly another country, and one that is so fun to explore and go to relax.

Pictures? Of course! Here!
posted by Danielle at 9:37 AM No comments: 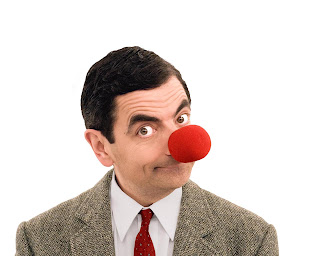 I have no explanation for this, except that it is some sort of charity appeal where everyone wears a red clown nose. This definitely rates as one of the odder things I've seen in the UK.
posted by Danielle at 8:42 AM No comments:

Today was Inauguration Day, in case you didn't know or weren't reminded by every major global news outlet. I watched the ceremony via live videostream on my computer at work, starting from about 4pm UK time. I knew a lot of people who joined the throngs on the National Mall in Washington, and for one of the first times since moving here I really felt like I was missing out on something in the US.

For so many reasons, the national election of Barack Obama is a moment for Americans - no matter where they are in the world - to stand up and be proud. I feel like I can walk down the street now (in New York, in London, in Paris, in Mumbai) and not be ashamed or afraid. We as a nation proved it to ourselves and to the world that despite our past mistakes and missteps, we're still the incredible society we always claimed to be. To see the millions (literally, millions) of people gathering on the nation's front lawn together at 6am in the bitter cold was a tangible reminder of our inherent unity and idealism. To be watching the display 5 hours ahead, in the dark, with cynical and sarcastic Brits surrounding me was less of a celebration and more of a reminder of how much farther we have yet to go.

Clearly much of the derision I heard was cultural; for a country who prides itself on the separation of church and state (the US), it was confusing to the English to hear a pastor give an invocation and the oaths taken over a Bible-so-help-you-God. But for a country with more pageantry and pomp and circumstance woven into the fabric of its nation and empire (the UK), they couldn't believe the amount of grandeur the Inauguration Ceremony displayed. I personally thought it was quite a tastefully American ceremony - poor public speaking (besides Barack Obama), various iterations of the flag, and Aretha (they did, of course, approve of her hat).

What was most upsetting, however, was the disconnect of the moment somewhere across the cultural divide. I didn't catch much of Obama's speech because people around me were cracking jokes and asking where the sniper was located. They didn't give themselves the opportunity to absorb Obama's message of turning the ship around and braving the storm instead of running from it. In the end, that might be the moment of true cultural difference in the US and UK's child-parent relationship: we're always ready to believe in the possibility of tomorrow, whereas the UK is bound up in the legacy of yesterday - too jaded to look forward.

I've learned so much about myself and myself as an American living in the UK these past eight months. Today's inauguration of Barack Obama was one more lesson in framing the nuances of living in a global society. I can only hope that as America eases the chip off of its collective shoulders and emerges from the Bush era with a restored confidence, Barack Obama's message of possibility will start to permeate cultures that don't have their own agent of hope.
posted by Danielle at 9:13 PM 2 comments:

Email ThisBlogThis!Share to TwitterShare to FacebookShare to Pinterest
Labels: America

Polo necks, turtlenecks, and everything in-between 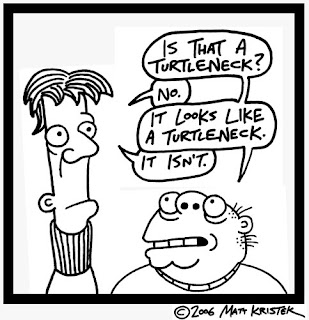 I had an interesting conversation at work the other day regarding the terminology for certain items of winter clothing - specifically those tops that have extended necks. In the US, we would call them "turtlenecks." If the neck was only 2" high, though, we would term it a "mock turtleneck." I was told that here, however, a turtleneck is a "polo neck," and a mock turtleneck is simply a turtleneck (because it looks like a little turtle sticking his neck out). I went along with this theory, and then a few days later came back with this question - if a polo neck is a turtleneck, what do you call a polo shirt?! The answer is a tennis shirt - but only posh tossers wear them, so no one ever talks about them.
posted by Danielle at 12:29 PM No comments:

One week back in London, and my "hiyas" and "you alrights" have returned 100%. It's freezing here, and I never thought that 28 deg F (-2 deg C) could feel so cold. The dampness is pervasive, and you really never get warm. I'm settling in for a long recession-era winter of low heat (keeping costs down!), knitting (more layers!), and homecooked food (lots of tossing all leftovers together into a soup). It sounds positively post-War! Now if only the BBC would put some decent TV on... this is what my TV tax gets me?! The only good thing on is Masterchef.
posted by Danielle at 12:24 PM No comments: