One year at home 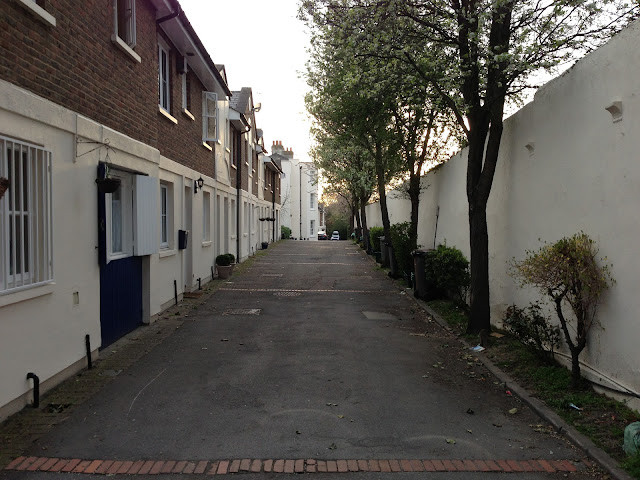 Tomorrow is the one year anniversary of receiving the keys to our home. Sometimes it seems surreal to think we own this little piece of paradise in between Dalston and Stoke Newington.

In the year since we purchased our home, I've learned a lot about what 'home' means. Of course there is the Pinterest moodboards about what your *perfect* kitchen looks like and mindlessly accumulating inspiring images of artfully placed vintage crates. But there is also what you do in your home – the entertaining, the hosting of guests, the visitors from afar, and the respect you show to your surroundings that makes it a nurturing refuge from a big global city.

Owning a home is so much different from renting in so many ways, but I think this notion of respect is central to it. Everything takes on so much more meaning when you completely control your surroundings and are 100% responsible for everything in and around them. What might have been annoying before takes on an offensive character, and what might have been a nice to have previously is suddenly an imperative. And vice versa.

But I think in the year that's gone, what I realized is just what I need for a place to be a home. A lot of things – actual things, like furniture and decorations – are exactly the same as they were. We're still lounging on the same IKEA sofa, and we're still eating from the same IKEA plates. They might not be of the highest quality, or the best of their kind, but they're ours and they've become symbolic of how The Irishman are choosing to spend our time: watching box sets together (West Wing, from the very first season!) and hosting dinner parties for our nearest and dearest. It's funny how things you thought you'd get rid of as quickly as possible actually become sentimental.

Overall though, I've spent exactly half of the year since we moved in NOT blogging. And I realized that I don't need nor really want blogging in my life. So I've made the decision to shutter Bloody Brilliant. Or at least, no longer update it. The winddown will be slow – I'll treat you to photographs of the final kitchen, once we find a tiler, and a few other shots of the house, and give you the update on our summer so far. My last post will be at the end of the month, when The Irishman and I depart for our two week summer holiday to Portugal. We've not had 2 weeks off, together, without family, friends, or other commitments in 3 years, so we're pretty pumped for this break. This seems like the perfect time to bow out gracefully.

I know there are a few of you who will be sad that Bloody Brilliant won't be an active blog any longer; I know there are more than a few of you who won't really mind! I'll write a post or two about how blogging helped me in my expat life, and what I think is great (and not so great about blogging). But I wanted to thank all of you who have, past and present, commented on the blog and reached out to me. It's been really wonderful to have you. The next few posts on here will be for you, and hope you enjoy them. xx
posted by Danielle at 3:22 PM 6 comments:

Howdy from the homestead: a long overdue Project Casserole update

Well it's been a while, hasn't it?! It's like I just disappeared into thin air!

And I did, sort of, didn't I. I have to apologize to all of you – I've been here, and there, and everywhere over the last four months of not blogging. Mostly The Irishman and I have been working on the house, finalizing Project Casserole. But I've also been traveling, working, and living, and I've realized a lot of important things. 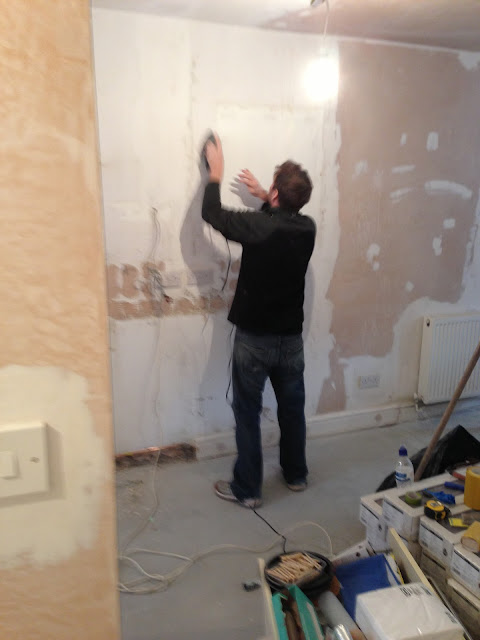 We spent the majority of the spring working our tails off on the house. After Agim and his merry men left, we spent the Easter Bank Holiday sanding, filling, and painting the ground floor before beginning to lay the flooring. 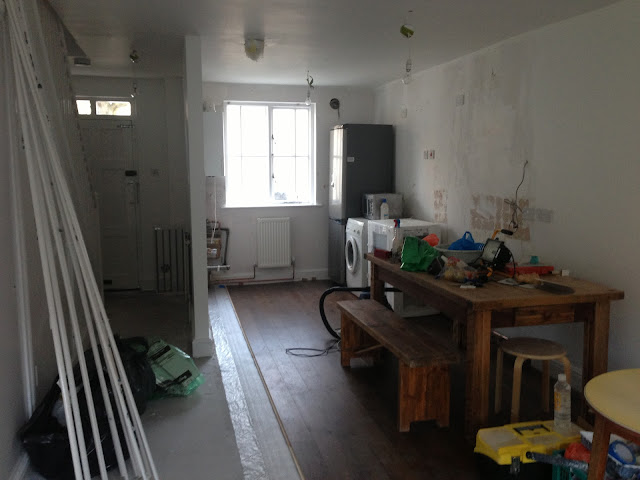 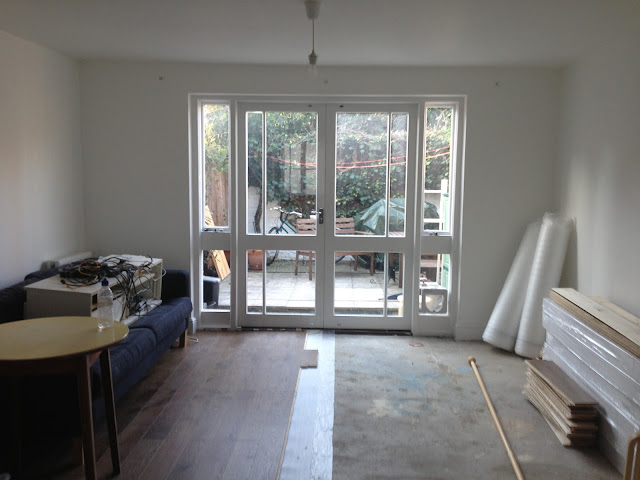 We got a good start on the floor before having to go back to work, and then wrapped it up the weekend after. It was a hard slog – The Irishman had a lot of black fingernails and bruised knuckles, and we both had sore knees from crawling around the on concrete floor for so long. 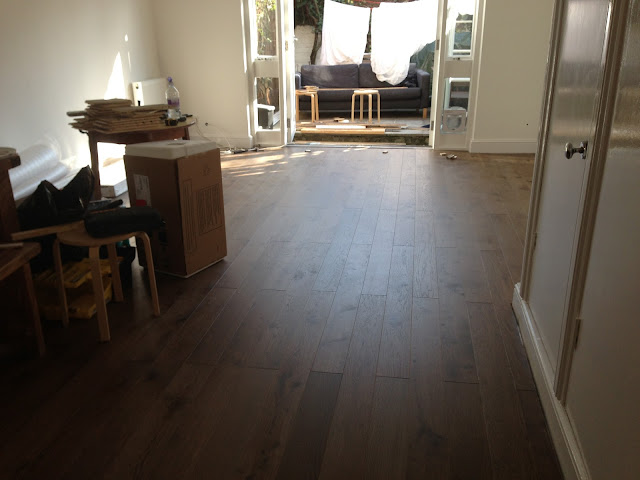 Once we got the floor down, we started on the deep clean. There was dust EVERYWHERE. In the bathroom, in the loft, IN MY CLOSET ON MY CLOTHES. It took at least 3 vacuumings just to get the dust out of the house and for the floors to feel clean under your feet. I've never scrubbed so hard in my entire life.

After the floor was complete, we went to IKEA to finalise our kitchen design and order the units. The IKEA experience deserves an entire post unto itself, but suffice it to say we had so many issues that we were weekly visitors to IKEA Tottenham and knew the staff by name. Oy. But here's what an IKEA kitchen looks like when it is delivered flatpack style: 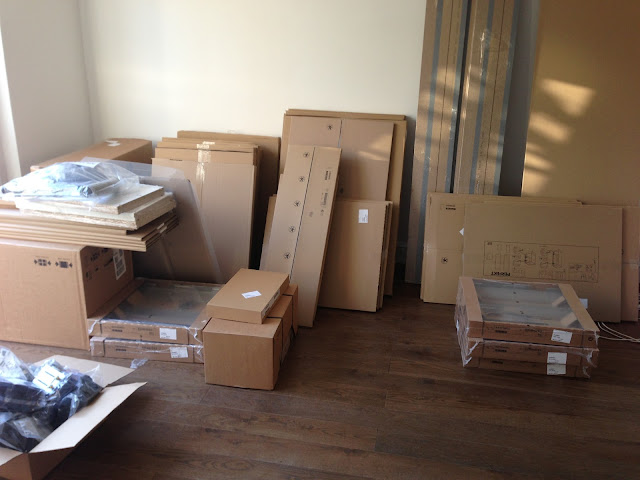 The actual construction of the units wasn't that difficult – if you can build a bookcase, you can build a kitchen. But I'm not sure that it would have been so easy to install it and make it look seemless if The Irishman wasn't an engineer. There are some seriously tricky things to installing a kitchen! 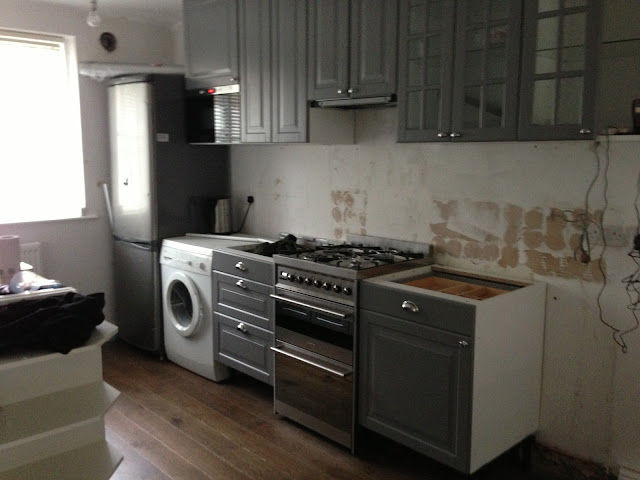 We spent a lot of evenings finalising small details in the kitchen, and lived without a working kitchen for probably 5 weeks. The night that The Irishman connected the sink was the highlight of my life. No more washing dishes in the bathtub or eating microwave meals. I think I might have wept with joy. 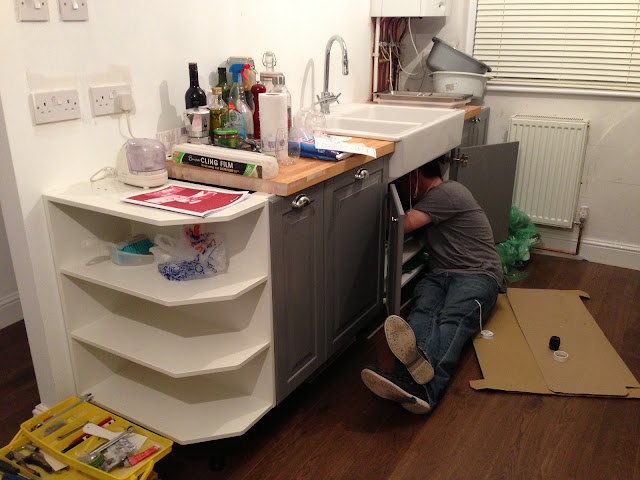 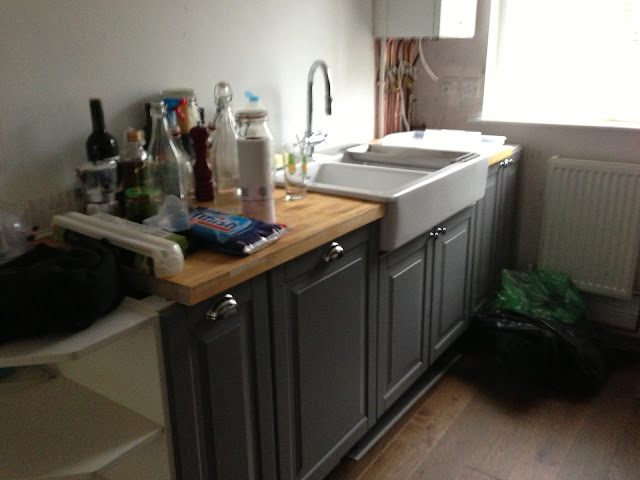 We even had a little helper one night – our neighbor down the street asked us to puppy sit her 10 week old Whippet puppy named Zelda. She and I ran around and annoyed The Irishman while he sorted little things out under the sink. She was very curious! 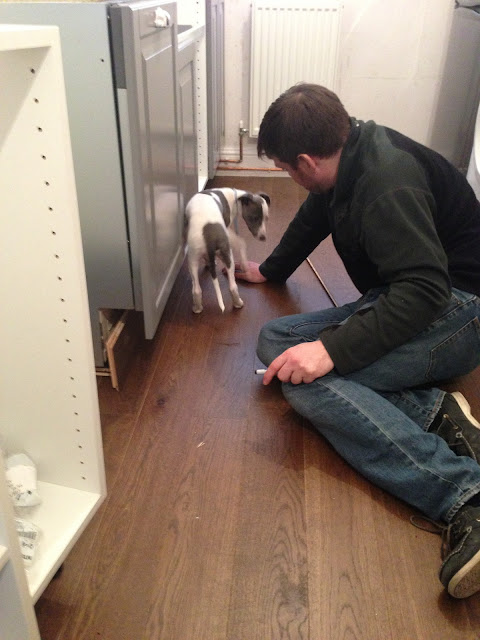 While I dictated all of the little "details", The Irishman got to pick out a new oven. He was so excited about this oven – it's a double oven which means nothing to me, but for the chefster it's a big deal. Here he's watching how it cooks something delicious and watching how his new toy performs. 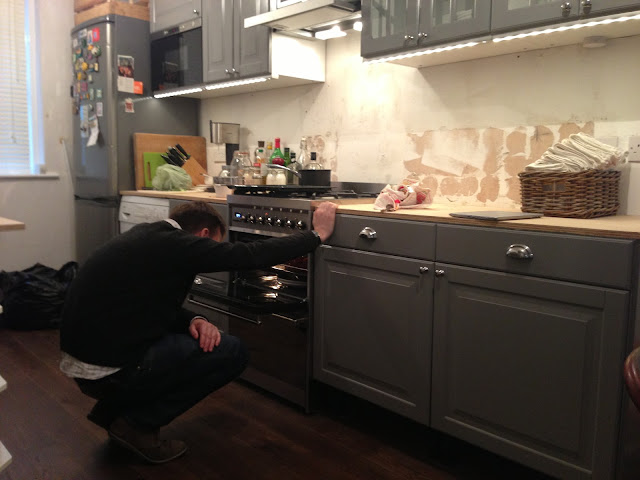 Also note above that we have plywood on top of our cabinets. We had a really hard time dealing with countertops – worktops as they're called in the UK. We (I) initially wanted marble, but that's not exactly durable. And then we started considering engineered stone and Corian, but that is absolutely ludicrously expensive. And then we just decided that it's probably best at this stage to go fully IKEA and use their butcher block wood worktops. Only, I hated the color options.

So I made The Irishman stain them. Of course.

And I also was really fussy about the color of the stain. So we bought a bunch of different ones, tested them all, and ended up CUSTOM MIXING OUR COUNTERTOP STAIN. I know. I know. The Irishman then decided that he also really wanted to "cure" them with a food-safe wood oil. He spent nearly every night smoothing them down with steel wool and then re-applying oil for about 10 days. He then left them while we went to the US for 2 weeks to let the oil set. 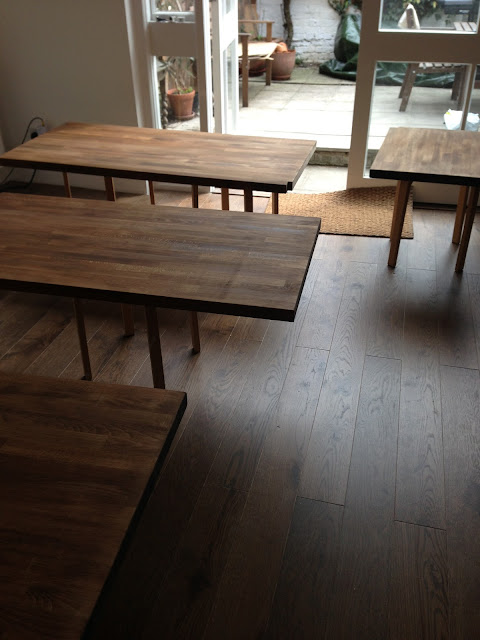 In the midst of all of this, we did do normal things like go into town for the sales. I dragged The Irishman into Liberty in early May to check out the end of their Spring Sale, and we ended up taking home 5 discounted Cox & Co stacking chairs. We put my paltry £5 Loyalty voucher to good use for an additional (paltry) savings. 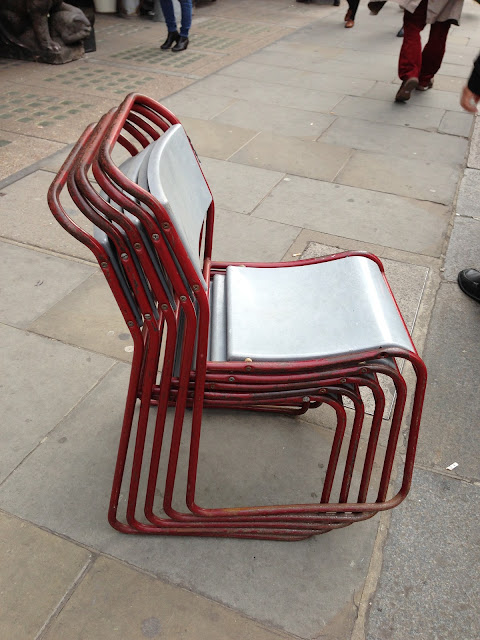 And then, we took a break.

We went to America for a wedding in Wisconsin. We hosted friends and family, including my world traveler career break peeps over at Banh Mi & You. I went to Doha (twice). We went to Ireland. We went to Glastonbury. We had BBQs. We saw friends.

Basically, we had a life.

Only now are we back in the DIY saddle, and finishing up little details in the kitchen. Last weekend, we filled a hole we made in the ceiling (we had to make the hole to get the cabinets straight and level), put the final sides on the cabinets to make the units look grey and seamless, and filled in little bits here and there. We also took the horrible bookshelf unit off one side of the kitchen and replaced it with a vintage wine rack that I found in a charity shop for £20. The Irishman was extremely excited to fill it with all of the wine he's been collecting for the past few years. FYI - the wine rack holds 54 bottles. In case you wanted to send us anything ;) 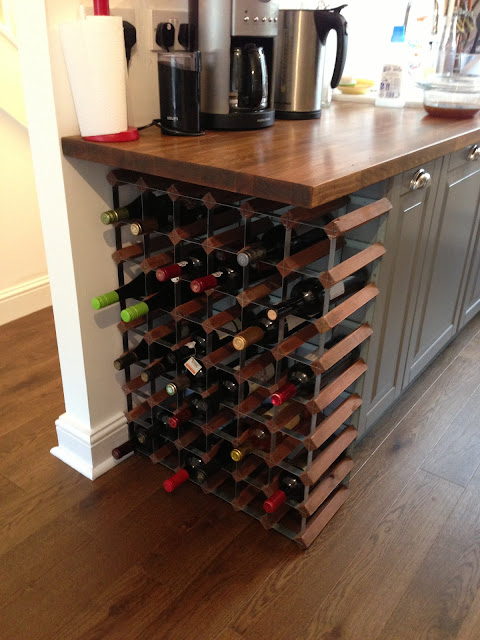 You can see our lovely countertops in this picture as well.

So what's left? Well, we have to put the beading moulding around the bottom of the walls throughout the ground floor. And we have six boxes of white metro tiles sitting next to the cabinets, waiting to be hung, but we can't find a tiler to do it any time soon. And we are continuously moving things around from cabinet to cabinet, trying out new locations for things.

A final overall picture is coming soon, as well as a few other updates for you guys. Thanks for sticking with me here – welcome home.
posted by Danielle at 6:20 PM 6 comments: