The Irishman and I spent this past weekend rediscovering our apartment. Despite our love of travel and exploring new places, perhaps the one downside is that upon returning home there is many times a sense of "where am I" and possibly more disturbing - "where's my
posted by Danielle at 8:04 AM 5 comments:

Email ThisBlogThis!Share to TwitterShare to FacebookShare to Pinterest
Labels: Week in Review

It's hard to believe it but only a week ago, I was running around Madrid eating everything in sight and soaking up the sun. I meant to blog about my trip as soon as I got home, but my return flight was delayed and I spent nearly an hour in line for immigration at Stansted Airport. Note to all of you: Stansted has the.worst. immigration line for non-EU/EEA citizens. It took forever! And then this past week at work was an utter whirlwind. Last night I went out for a friend's birthday and I don't think I've ever been so glad to have a drink to unwind.

Anyway. MADRID. The Irishman found out he was going to a conference there from Monday - Wednesday, so we decided to take advantage of his free flight and go out the weekend before. So we flew out Friday night and had a three day weekend to explore. Verdict? It is lovely lovely lovely. I really recommend it for a city break. The city is compact, so you can walk everywhere though the metro is only 1€ and clean and efficient. We had amazing weather, warm and sunny in the days and chilly but lovely in the evening. We ate amazing food, naturally, with the highlight being the Mercado San Miguel. An artisan food market by day, it is open until midnight every night and the stalls serve tapas all evening. It was a gastronomic marvel. Besides eating (a lot), we went to the Prado so I could see some famous Spanish paintings from my art history classes up close and personal. Goya's Black Paintings in particular were hauntingly beautiful.

The most enjoyable part, though, was really just exploring. We ambled through neighborhoods, taking in the sites, admiring the architecture, and imagining whether we could live there. Answer? Yes! It's a truly lived-in city, rather than a mass of high-rises. We did a bit of shopping too - I snagged an amazingly chic wool cloche hat and we brought back some really fantastic chorizo and manchego. Mmmm! Pictures? Of course! Here are a few to give you a taste of the city, and there are more here. 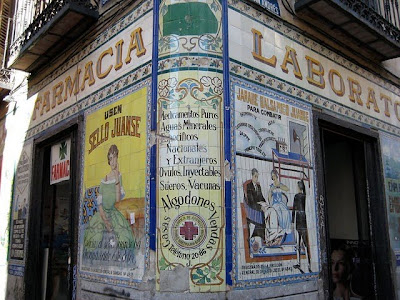 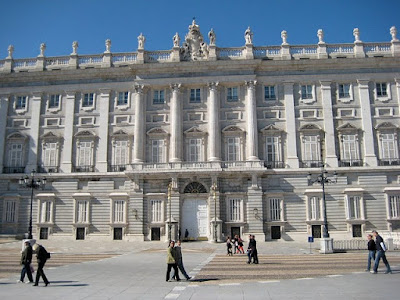 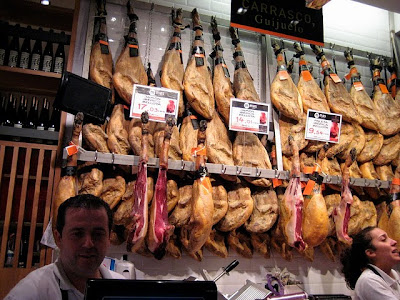 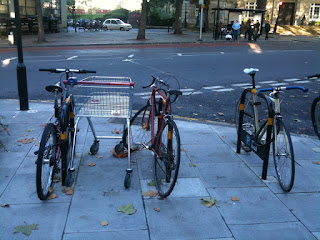 posted by Danielle at 9:10 AM No comments:

So I am on Virgin Trains on my way back from spending all day doing store audits for work. What, you say, you went shopping as part of your job? Why yes, yes I did, and it's not as glamorous as it sounds. I recently picked up a new account at work for a major UK retailer and as part of our initial phases we have to audit the shopping experience. So I got on an 8am train and headed north to visit 8 stores with a team of colleagues who have been visiting stores since Monday. Sheesh.

The thing is, I really like going up north. I like the industrial cities, and the red brick architecture and abandoned smokestacks remind me of Baltimore and Philadelphia. I like how nice everyone is, how if you drop something they pick it up for you and how everyone knows each other. I don't really like how everyone drives everywhere - that part reminds me of Syracuse - and it can sometimes feel a bit forlorn how cities like Manchester and Birmingham are pinning their futures on retail. But they are also hotbeds of creative talent, with inspiring musicians and designers and artists all budding there. Oftentimes I think, maybe I'd like to live here.

It's often said that London isn't truly representative of England, and sometimes after I experience the charms of these old anchors of England's north I find myself agreeing. There is a solidity and permanence about Northerners and the counties they call home that makes London's oldest monuments seem like sketches drawn yesterday.

As a New Yorker and now a Londoner, I'm become accustomed the balancing out the tension of belonging to the big economic engine while wistfully wishing I could be part of the ideological heartland. It's a difficult terrain to navigate, as it sometimes feel there is never a happy medium between growth prosperity change and history tradition comfort. It is sometimes something, I think, you have to choose depending on the place in your life in which you find yourself. What is more important: the promise that a big global city holds, with all of its potential risks and rewards, or the reassurance of community and the comfort and stability it provides?

I don't know the answer: never have and it seems like I shan't for a good while more. But I do know that, like going to some of my old American haunts, going north has the same effect of making me nostalgic and contemplative.

Somehow, I think that's the point.

posted by Danielle at 8:06 PM No comments:

I don't typically rant about politics on my blog, but this really annoyed me so I feel like I just have to vent. Proceed with caution.

So the major political parties have had their annual conferences over the last few weeks, and the Tories are the last to go. They are up in Birmingham, reveling in their coalition government and giving the UK a stern lecture on how the economy is still fragile and there is a need to cut benefits. On Monday, they announced their first and probably most controversial move: to cut child benefits.

In the UK, families (of any sort) receive a stipend intended to help cover additional costs incurred by, well, having a kid. I am unsure about the exact amount, but it seems to be about £1,000 per year that isn't taxed. What the Tories have decided is that those families with parents who are high earners will now lose out on the benefit. Which I am, in principle, okay with. However, I'm really upset about the arbitrariness of the income thresholds that will be affected.

Basically, the income threshold is £44,000 per annum. But because tax is in the UK is calculated on an individual basis not households (no joint filing for married couples), the threshold applies to any family where ONE parent earns £44k or more even if their total household income is only based on one person's income. So ostensibily you could have a couple with one child who both work, earning £40k each for a total of £80k, still receiving the child benefit, but then have a couple who have three children, one working earning £50k and the other staying home to care for the kids, and not receiving the child benefit.

Besides being inherently unfair, the bit of this that bothers me the most is that, again, it's single moms who lose out the most. Women typically earn less than men anyway and by evaluating eligibility by individual rather than household, you actually discourage them from seeking raises, promotions, or career advancement. Single mothers have to pay for childcare, unlike couples with a stay-at-home-parent, increasing the cost of care and limiting options.

David Cameron has apologised for the unfairness of this new system as he recognises that people see the incongruent logic behind it; apparently the threshold and the policy are based on the current tax system that does not recognize income on a household basis and it would cost more to change the tax system than to just institute this cut. The Tories are also trying to help by saying they'll give a tax credit to married couples, which is absolutely ridiculous because, again, single moms and those who don't want to be married lose out.

Everyone knows the economy isn't quite stable, and that economic austerity is the way forward, and I'm okay with that. But I really believe, as a taxpayer in 2 countries, that the cuts and policies put forward as solutions to our troubled economy MUST be fair to all. You can't take something away from those who need it most just to keep the solution neat and tidy. I really hope that the coalition government rethinks how it cuts the child benefit and just who is going to make the most sacrifices for our collective economic health.
posted by Danielle at 3:30 PM No comments:

Email ThisBlogThis!Share to TwitterShare to FacebookShare to Pinterest
Labels: Politics

Sorry it took me so long to post, guys. I flew back from Athens on Sunday night and promptly passed out on the sofa, waking at 10pm with a nasty head cold. Then it was back to work on Monday and go-go-go.

The conference was absolutely amazing. The organizers call it a "unconference" because it's entirely self-directed - "user generated content" if you will. There are a few anchoring events, but all of the other sessions are developed and presented by the attendees. I was really nervous about going because everyone is encouraged to come with content to share but I didn't think that was directed at little old me! Plus, I'm really bad at mingling... I have a hard time making small talk with people I don't know! Those two things combined made the conference a perfect storm of stress for me, made worse when I realized that I hadn't brought any business cards with me. Efffffff!

But I did it and I loved it! I learned a lot, met some really cool and inspirational people, had some really interesting conversations with some really fascinating people (entrepreneurs who started their first startup at 23 and are on their 3rd...). Sigh. And I even got to lay on the beach for a bit though the air was pretty cold.

Verdict: I'd go again in a heartbeat. And I'd remember to bring business cards.
posted by Danielle at 8:26 AM No comments: