Home is where your hairdresser is

A while ago, when I met the Irishman's best friend, he asked me what I missed most about New York. I had just booked a haircut with my New York hairdresser Paul for my visit home a few weeks later, and said that he was definitely at the top of the list. The Irishman's friend turned around and made a sage comment about how it meant I hadn't full transitioned to London if I my heart was still with a New York hairdresser.

Well fast forward nearly a year and I still hadn't found someone to replace Paul; for the last few haircuts I've gone from salon to salon seeking out someone I trusted to take care of my very unruly mane. Until last week: I was at the pub having a few too many glasses of rosé where I met my friend Ben's mate Daniel who cuts hair and is amazing. He immediately diagnosed the issue with my constant frizz and gave me a stern talking to about the state of my locks, and told me to come around and see him to get sorted out.

On Friday night, I went round to his salon and for £30 I've got a new lease on my hair. It was funny - usually I seek out trendy salons with edgy stylists and chic interiors, but Daniel's salon is like a neighborhood family business. At any given time, 4 or 5 people who were related to or close friends with Daniel and his business partner Natalie popped round to say hi. They were drinking pints from the pub across the road and were good citizens to take the glasses back after they were done. Someone came in and asked to use the loo and was welcomed with open arms, just as the myriad kids who came round with their parents. It was such a cosy environment that I overlooked the poor hairwashing (a lot of water ended up on my face, rather than my hair), and having to wait 30 minutes to get in the chair.

So am I ready to completely transition from Paul to Daniel? Maybe - maybe not. A lady can't give up her loyalty to her hairdresser so easily, and Daniel and I have only had one date. We'll see if the magic lasts, and if my hair continues to look fabulous. But lets just say, London is feeling a bit more like home lately.
posted by Danielle at 8:04 PM 5 comments:

A hot and crazy summer

You know when life is just crazy, and there is so much going on that you want a vacation just so you don't have anyplace else to go? Yeah, that's me! This summer has been hot and heavy, with my weekends just as scheduled as my workdays. Last weekend my parents stopped by on their way to France, so Saturday evening the Irishman and I snuck in a quick date by going to ClerkFeast - an open air urban picnic that was part of the London Festival of Architecture. Held in an old, unused gas station, it was a big buffet of lovely food donated by restaurants like Hix Oysters, The Modern Pantry, and St John's. We drank English wine from Chapel Down, which was a revelation it was so good, and sat on blanket on the carport and watched the sun go down. It was magical. 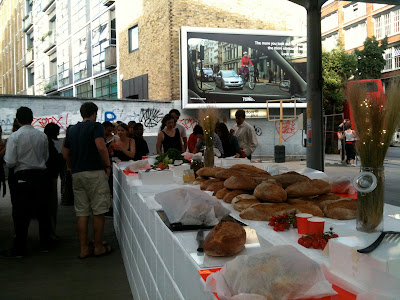 And a good thing too because I then spent all day Sunday with my parents. Somehow I got a severe sunburn after sitting in my garden for all of an hour, which was unpleasant, but I was actually okay with it because it meant that I'm not dreaming the amazing summer we're having here. After a nice roast at The Albion, we went up on the London Eye, which I've never done and am pleased I did but I think once was enough for me. I had a bit of vertigo at the tippy top and every time the Irishman and my dad leaned over to look at something I got a bit freaked out. Amazing views though. 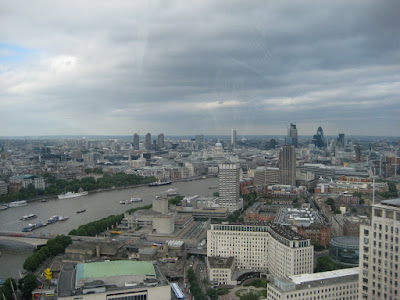 My parents left for France on Wednesday, so after meeting them on Monday and Tuesday nights I was happy to return to my yoga class. I haven't actually stretched like that in so long and I left on my bike resolving to renew my personal vow of making my Wednesday yoga class a priority. Speaking of bikes, I've been riding my new steed for a few weeks now. Meet Diana Ross! 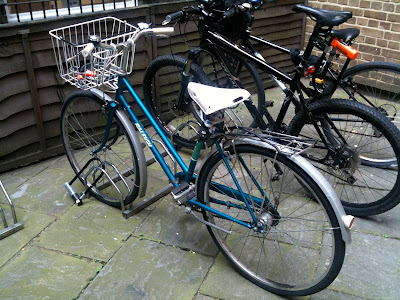 Diana Ross was my friend Rose's bike. When she left London about two months ago to return to New Zealand, I took custody of her and have been getting to know her and her quirks. She is a true ladies bike, with a very low cross bar, so I don't have to throw my leg over the back and embarrass myself in a skirt. She only has 3 speeds - flat, little hill, big hill - and basically she's just really cute! I'm enjoying riding her around town.

I'm sitting here writing all of this with a lovely skinned knee and the remnants of hangover, thanks to this year's 2nd annual 4th of July kickball game (held a week late due to scheduling difficulties). It was violent match, much like the World Cup Final I've just been watching, and yet again the Colonies were creamed by the Commonwealth. I just don't get it. Anyway, I have to go get some first aid cream so I don't have yet another scar. At least the World Cup is over - I can't take this much sport. Especially when I lose!
posted by Danielle at 9:39 PM No comments: 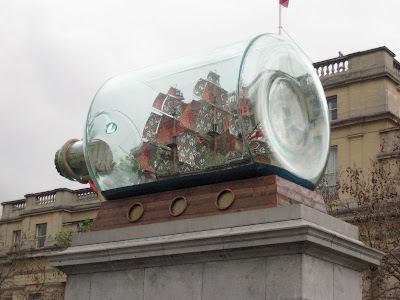 Email ThisBlogThis!Share to TwitterShare to FacebookShare to Pinterest
Labels: Spotted 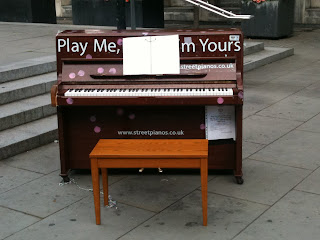 Email ThisBlogThis!Share to TwitterShare to FacebookShare to Pinterest
Labels: Spotted

Summertime and the living's easy except for one thing

It's been hot hot hot here in London for the longest time and I am LOVING IT. I keep saying I'm in my natural habitat, because hi it is July and IT SHOULD BE HOT. The Brits around me are all fanning themselves and lamenting the heatwave, nearly melting the minute they step outside into the sunshine. When it is humid, they call it "close" - as in, the air is close and you can feel it - which I find amusing and quaint. But in this hot, sticky, humid, muggy, whatever you call it, weather, I've been absolutely craving ice cream. Obviously there is ice cream for sale here - Ben & Jerrys and Baskin Robbins and Magnum bars and Mr Whippy and lots of artisanal gelato type places - but no one has what I want: soft-serve vanilla in a cone with rainbow sprinkles. It was my treat of choice when I was a kid, and its the best type of feel-good ice cream around. The Mr Whippy soft-serve is gross in comparison, and sprinkles (called hundreds of thousands here, so cute!) aren't really an option.

The Irishman loves ice cream as much as me, and has been treating to some homemade ice creams this year, but sometimes you need a little bit of cheap goodness to make you feel good. So this weekend as all you American readers celebrate the 4th, pop down to your local ice cream parlor and get yourself a soft vanilla with rainbow sprinkles - for me.
posted by Danielle at 6:35 PM No comments: