We've found and selected our builder, a knowledgeable man named Ajim, and bargained him down to a more affordable – though still eye-watering sum – and now we just have to wait for his plumber to free up so that we can start work. The pipe work is the first thing to happen, and the plumber is currently booked up for the next week or so. Apparently we'll get a start date from Ajim sometime in the middle of next week. My birthday is March 6th so I bet you £5 that they'll be waking me up at 7am on my birthday to begin the renovation. That's okay, because it means I get to buy myself this exciting birthday present:

Honestly I never thought I'd be more excited by an appliance than a pair of shoes, but there you go.

I am so excited that we are nearly ready to start tearing down walls, ripping out pipes, and generally transforming our ground floor. It's taken a lot of planning and thinking, which is surprising, because I thought that when I owned a house I would have free reign to do whatever I wanted, whenever I wanted. But even though I don't have to ask anyone's permission, doing stuff to a house you own takes time: thinking, planning, discussing, reviewing, budgeting, sourcing, negotiating, approving, all before you start any work. Which makes sense, because everything you do to a house either adds to or reduces the value of the property. Whereas when you rent, you might need to get permission to paint, but then you can go ahead and just buy the paint and get it on the wall. It's a subtle difference but you definitely feel it when you realize it's taken 6 weeks to decide which contractor is going to remove the wall you've wanted to get rid of for 6 months.

So stay tuned for more updates on when we start the demolition and start creating the kitchen!
posted by Danielle at 6:53 PM No comments:

Email ThisBlogThis!Share to TwitterShare to FacebookShare to Pinterest
Labels: ProjectCasserole 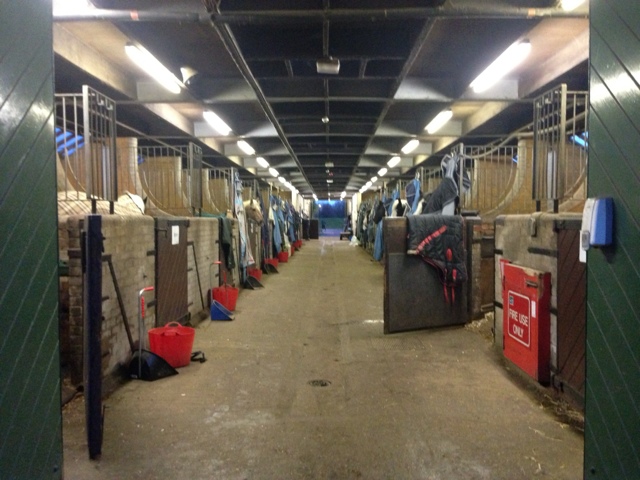 Editor's note: I drafted this post to completion twice and Blogger lost it both times! So I really hope that third time is a charm!

After I wrote my post in January about trying to be happier, I spent a lot of time thinking about times in the past when I was truly happy and what was present then that is missing now. And one starkly missing element is animals - specifically dogs. This is the longest period of time in my life that I've gone without having a dog, and I feel it on a daily basis. I desperately want a dog, especially since London and my neighborhood of Stoke Newington particularly are so dog friendly and welcoming to four-legged friends. But as much as I'd love to get a puppy right now, I do know it's not the right time: I'm traveling a lot for work right now, and I really value the freedom I currently have to jet off for a long weekend in another country at a minutes notice (without worrying about a dog sitter). Plus given all of our house renovations and capital expenses, I don't think our budget can stretch to cover the inevitable veterinary bills that come with rambunctious puppies. 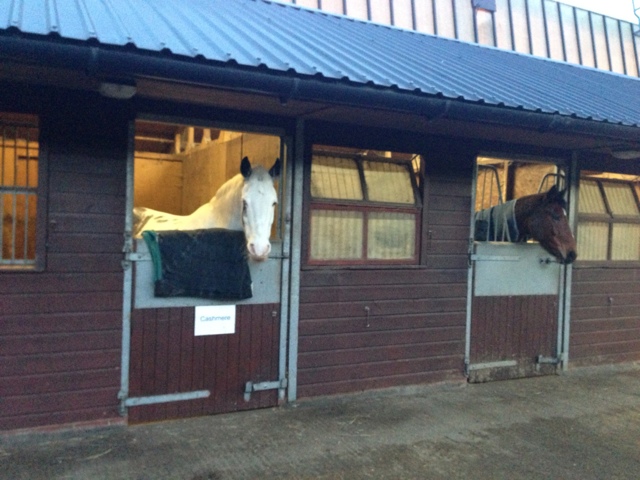 So while I console myself by befriending all of our neighborhood dogs - like Peggy the 4 month old Chow Chow and Bruce the cool corgi mix owned by the proprietor of my local coffeeshop - I decided to find another way to get more animal interaction in my life. Cue horseback riding.


When I was a kid, I was nuts about animals and I was lucky to have parents who indulged this passion by letting us have a menagerie: dogs, hamsters, fish, ferrets. They also indulged me in horseback riding lessons twice a week. Not only was I riding, but I even picked up a menial job turning in the horses each evening, brushing them, blanketing them and feeding them. I joyfully rode and hung around the stables until my early teens when my parents made me decide between horseback riding lessons and dog shows; I already had two dogs and knew it was highly unlikely I could convince the parents to add a horse to our family. So I sadly hung up my jodhpurs and haven't been on a horse since. 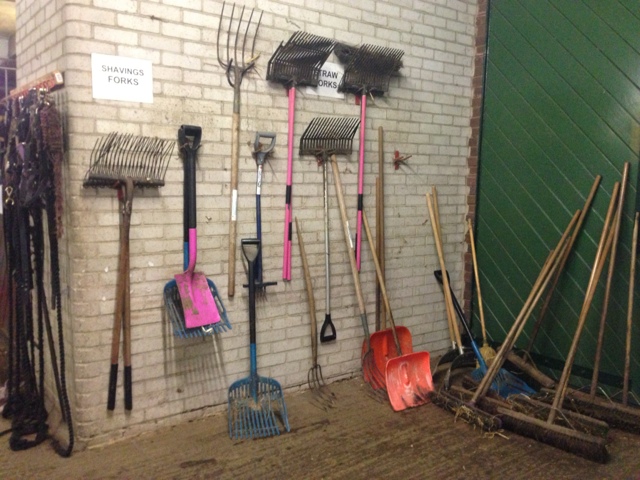 Until three weeks ago, that is, when I took the 56 bus from my house to the Lee Valley Riding Centre for one of their super-beginner assessment classes. I had brought my riding helmet, breeches and paddock boots back to the UK with me during one of my previous trips home to the US, so when I arrived at the stable suited and booted I was told that I could do a little bit more than riders typically get during a new rider session. I got to lead my mount to the outdoor arena, ride without a leader, and put my horse away after the lesson. Hilariously though, my riding equipment was so old that I had to get rid of my gorgeous old velvet helmet with the ribbon the back as it no longer conforms to equestrian safety regulations. Ha! 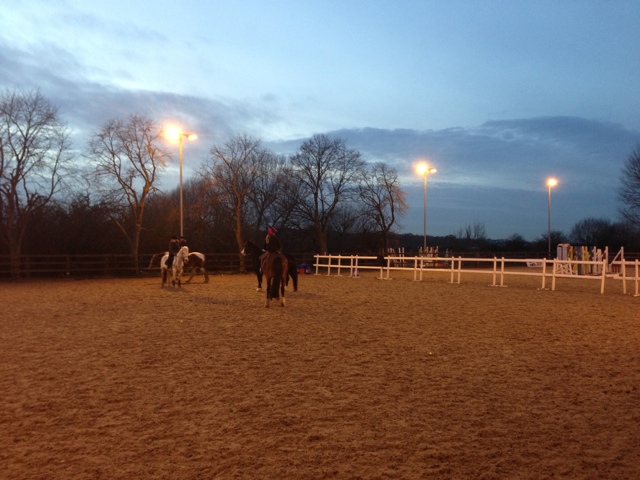 And it was joyous. Just like riding a bike – once I was up in the saddle, everything I ever knew about riding came back to me: how to hold the reins, how to position my feet, when to squeeze my knees. It was amazing. I was so happy, despite the cold, for that hour, and at the end of the class the instructor suggested that if I were to return I could skip the introductory class for new riders and move up a step to the beginners class. She said that because she hadn't seen me canter, she couldn't move me up to Novice. That's okay by me – it's been two decades since I moved that fast on a horse and I'm happy taking my time and working my way up to it.

After the lesson, I got back on the bus and arrived home smelly, covered in horsehair, frozen to the bone, but elated. Classes are £28 for a group lesson, so no prohibitively expensive, and I plan on trying to get out there at least once a month if I can. It's not as good as being woken up by a dog every morning, but I'll take it!
posted by Danielle at 12:37 PM No comments:

Flying over the Middle East

Happy Valentines Day, everyone! Apologies for the absence; I've been absolutely up to my ears with work and the house renovation over the last few weeks, and then had to fly to Doha unexpectedly last Sunday. It's one of the trade-offs of working with another culture that you have to give up your weekend sometimes to adjust to their schedule (Fridays are their Saturdays).

Anyway, I was flying back yesterday and for the first time we had an absolutely clear sky without cloud cover and could see the geography below in detail. I was so curious about the landscape that I switched off my movie to track our progress on the inflight entertainment system – and discovered we were flying above one of the most contested areas in the world. 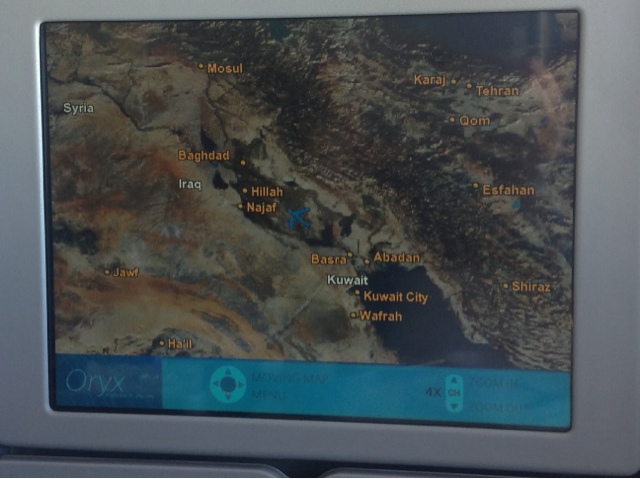 Our flight path took us over Basra, where I saw the US military base, and on over valleys that looked surprisingly verdant. There were snaking rivers that I found out later are the Tigris and Euphrates, major arteries that empty into the Persian Gulf. We flew over other cities like Najaf whose names have become synonymous with the loss of American soldiers. And then we flew over Baghdad.

I never ever thought that in my lifetime I would see, even from the air, a city that has been defined, for the majority of my life, by war. As we passed, I kept imagining images of protestors pulling down the statue of Saddam Hussein and how when I was in Germany for New Years they captured and executed him. I thought about the war that ideologically tore America apart for the first decade of the century and to this day splits people on basic democratic issues. And I thought, this is so close to a part of the world that I am drawn increasingly into on a personal and professional level that I can't ignore its proximity nor its importance.

Expats leave their home countries for opportunities and experiences, and so frequently those opportunities and experiences happen in places beyond their new homes. So even though an expat from  the US might assimilate to life and work in the UK, there's an even bigger challenge when her work takes her to the Middle East where cultural norms and values are that much more different.

It can be hard to be an American in the UK; it can be even harder to be an American in the UK who goes to work in the Middle East – where do you belong? Who are you representing? What is 'you'? Who are 'you'? I thought I had all of those answers, but confronted with such a symbolic place as Baghdad – even from 30,000 ft – I suddenly thought that maybe I don't have such a handle on it. And probably that means I'm closer to the truth than not.