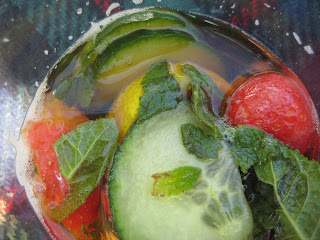 This past weekend was late spring Bank Holiday. And my my my the sun cooperated for ONCE in UK history, giving London 2.5 days of lovely lovely sun. It was 27 deg C on Sunday, a super hot 81 degrees F, perfect weather for an all day boozy picnic in Regent's Park.

I used the picnic as an opportunity to do 2 things I've always wanted to do: buy a set of boules, and try the very British institution that is the Pimms cup. I wanted boules because there is nothing more relaxing than throwing metal balls around in a park on a nice day, and Pimms is the perfect accompaniment to such games (or so I'd heard). I didn't get a chance to have Pimms last year because of the terrible weather we had last summer, and it didn't seem right to have my first Pimms during a downpour. So Saturday, the Irishman and I made a trip to Lillywhites in Piccadilly to seek out the boules (and got an excellent deal), and Sunday we set up shop near the duck pond in Regent's Park to spend the day with friends.

It was only a matter of moments after the blankets were spread on the ground that a glass of Pimms was put in my hand. Pimms is apparently one of those institutions that has endless variants and people like to judge you on what you prefer in your Pimms cup. The Irishman did some research, of course, and we ended up with a whole host of stuff in the bottom of our plastic cups: requisite cucumber and mint, and wildcards strawberries and lemons. We also had tonic, lemonade, and ginger ale and used them in various proportions. The result is a light, sweet, seemingly gentle and very refreshing concoction that is perfect for a hot summers day. I liked mine with ginger ale and tonic to cut the sweetness, but Pimms is frankly good with anything you like in it.

Once the Pimms kicked in, we broke out the boules and of course the boys got official. The set we bought came with the official petanque instructions and the measuring tape, so they put them both to good use. 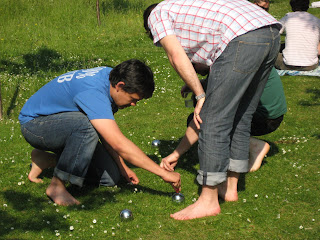 I'm not sure how long they played, but the heat and the Pimms got to them, and the game ended with no one winning because they forgot who scored what. Understandable, because the best part of the day was lazing in the shade. Post picnic, a pub was in order, and our little group disbanded having marked, officially, the beginning of a British summer. And in true form, today we had sun and right now at 9pm on Monday, it is raining. A fitting end.
posted by Danielle at 8:25 PM

Email ThisBlogThis!Share to TwitterShare to FacebookShare to Pinterest
Labels: Holidays