The Apprentice in Covent Garden 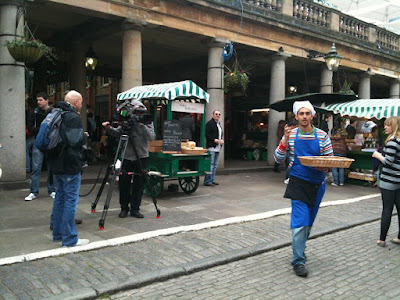 Saturday the Irishman and I were walking through Covent Garden, and we saw something suspicious. Two men in weird bakers outfits were hawking £1 muffins, and they were being filmed. The Irishman investigated, and determined we had happened upon a filming for one of next season's Apprentice challenges.

I don't watch the Apprentice; I think it's sort of dumb, and all of the people seem a bit ridiculous, and it just reminds me a lot of what I do for a living in a really bad way (I am, after all, in marketing). But these guys looked so dumb, and I was so curious, so I bought one.

And guess what: it sucked. It was stale, stodgy, not nice, and frankly was probably mass produced in a factory somewhere and taken out of plastic to be sold to witless suspects like myself. So, lesson learned - trust your instincts, the Apprentice is terrible television, and they're bad bakers too boot.