My week in Doha

So I'm back in the office, sitting at my desk, trying to get photos from 5 different places into one blog post. Apologies for the weird posting!
Anyway, here it is - a week in the Middle East, working, exploring, and trying to understand this fascinating region.

It started with a flight mid-day last Saturday, which I started with a glass of bubbly. Underneath the glass was a bottle holder for my water. I was served a 4 course meal and my seat had massage settings that I used for the majority of the flight in a state of semi-consciousness. Brilliant. Ryanair this was not, and I am now dreading my flight to America on Friday in row 7,000 of BA economy class. Bleurgh. 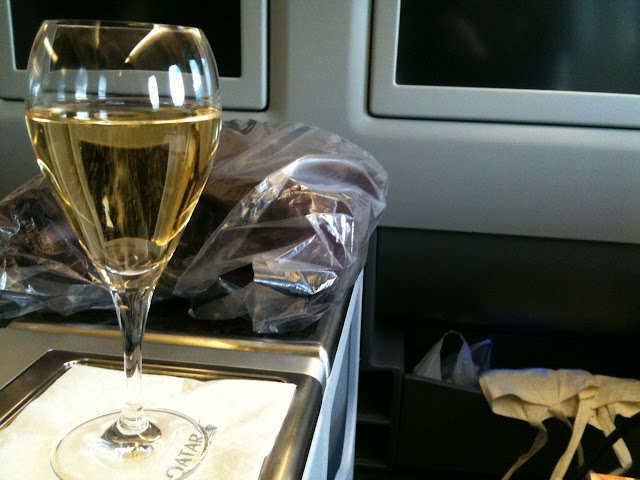 Part of my job in Qatar involved visiting museums, and this is by far one of the most amazing museums I've ever visited. Designed by I.M. Pei, the Museum of Islamic Art sits on reclaimed land in the middle of the bay. It is absolutely beautiful from the outside... 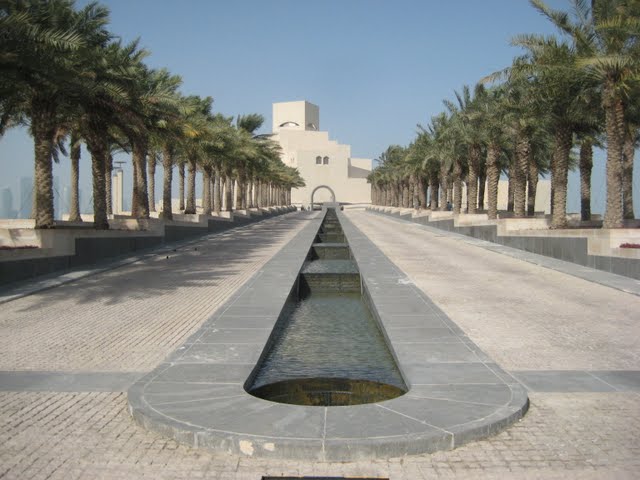 And seriously stunning on the inside. This view is looking up to the skylight in the middle of the building's roof. 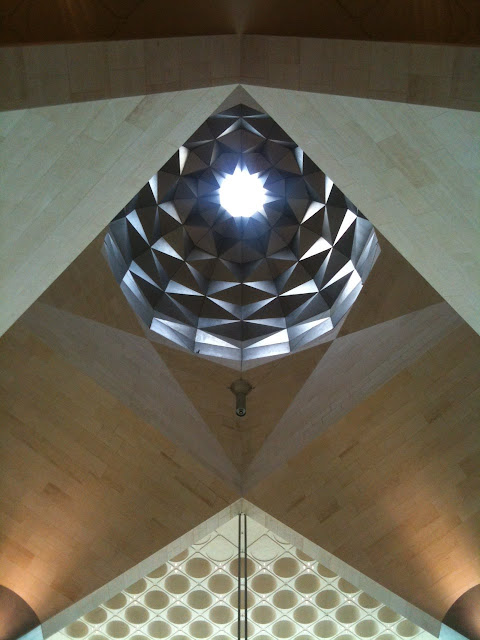 We also visited the New Old Souk, or Souq Waqif. As with everything in Doha, it was rebuilt recently ("restored") so it is not the original structure. But you can still get spices, animals, and clothing in addition to touristy tat. 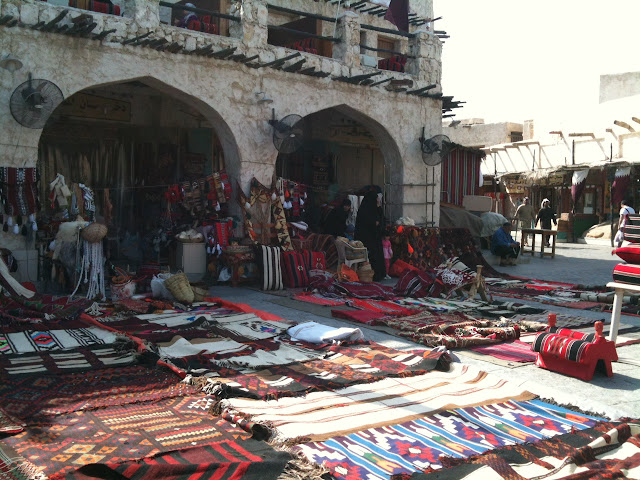 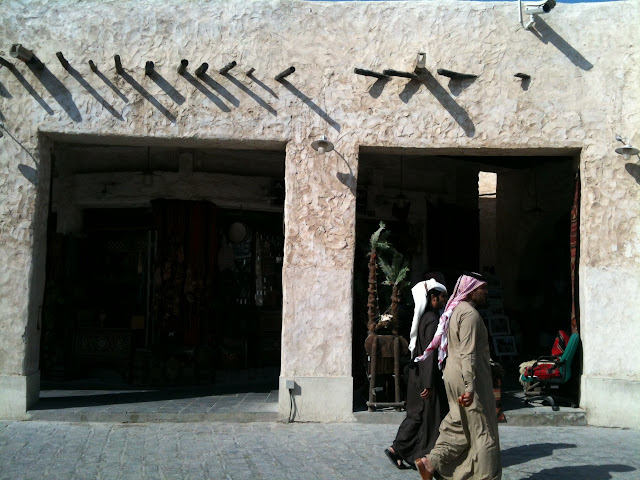 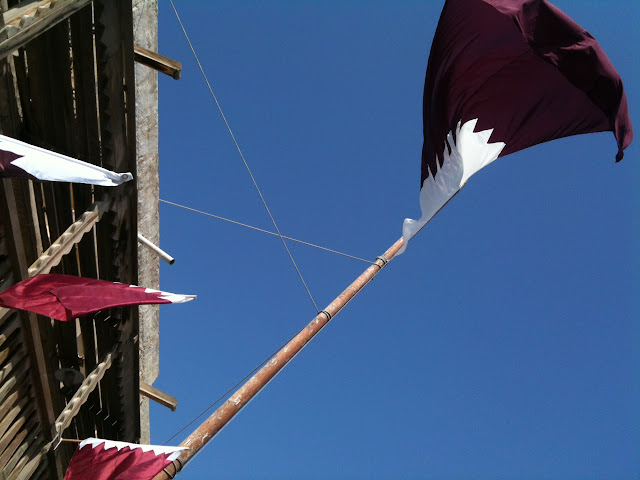 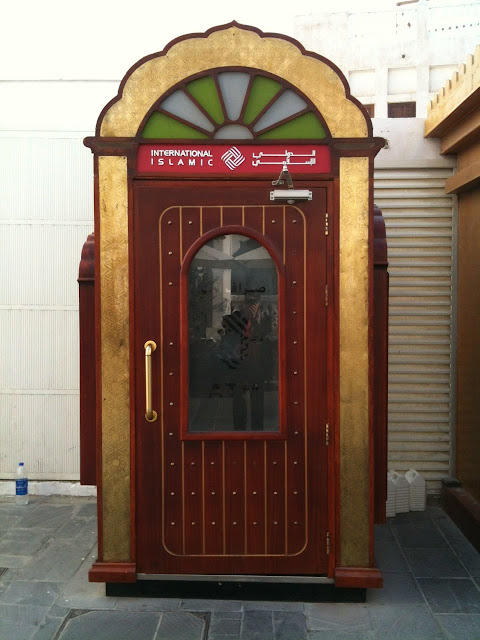 We also went to one of the ginormous malls in the city; we were invited to a very swank opening while we were there that was being attended by the Emir and his royal entourage so we had to spruce up the gladrags. It's a good thing that Zara was there, with a very similar pricing structure to that of the UK. But the mall was something straight out of Vegas - complete with a river and gondolier that would take you from one of the mall to the other. 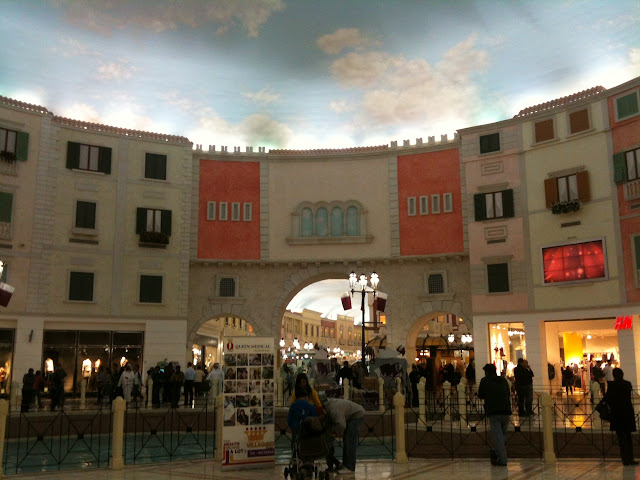 So that was an experience.
But mostly I spent my days calling our driver, waiting for our driver, or being driven somewhere – usually to meetings or important sites that our client recommended we see. No one walks in Doha, so even if your destination is literally around the corner you wait for a driver to take you. Our driver was lovely, a man we called Mr. B, and we found out a little bit about him - a Nepalese immigrant working there for a few years to make some money.
That's another hard realization: everyone there is an immigrant. Qatar is a small nation, with a relatively low population of native citizens. Everyone else is either a Western expat there to work, or an Asian immigrant there to work. And te servent culture in the Middle East is strong. So many times I wanted to say "that's okay, I don't need you to bow/call me m'am/explain the difference between the 9 steak knives you have for me to choose from" (seriously). But when you're a guest in someone's country, you have to live as they do to some extent and effusive service is the easiest to accept.
The team that I traveled with to Doha was an all-woman project team. That's not unusual in my industry, but before leaving we did have a few people raise their eyebrows about it with regards to the region. Qatar is part of the GCC and one of our clients explained to us that all member states of the GCC have adopted similar dress codes for their citizens including the white thobe for men and the black abaya for women. Apparently abayas used to be bright and colourful, kind of like saris, but now they are black and somber in a Iranian Shia tradition. Women wear these in public, with their face either exposed, half veiled, or fully veiled. It is difficult to be a Western woman, dressed conservatively, but still feeling exposed when sitting in a room with women half veiled. It's the most awkward and self-conscious feeling you could ever have.
Beyond these cultural differences, Doha is experiencing an extreme transformation. The entire city is under construction, and the skyline you see today wasn't there 15 years ago. Everywhere there is something being built, and the ambition and energy were palpable. I've never witnessed a city with such a drive towards progress; everyone there was there for the single reason of contributing to the future of Qatar. It was inspirational, to be honest, and made me think that the Gulf is someplace to watch in the future – sort of like India, it is a region where the youth are organising themselves into a new generation with a lot of things they want to achieve. Returning to London felt like going back in time to an older world that maybe hasn't quite kept up with the economic / political times. I think that we will hear more about the transformation in that region over the next decade, and it will be more positive and exciting than not. 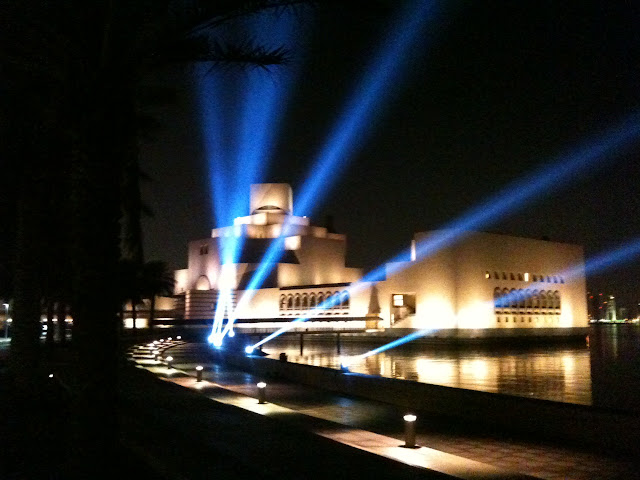