Lates at the Tates 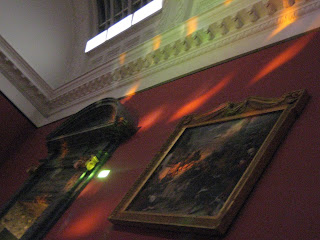 Many Fridays, the Tates - Tate Britain, Tate Modern - are open late for bright young things to enjoy the art and libations. This is not a new concept, as most of the New York museums do the same, and the V&A has themed Fridays once a month that usually are based on their special exhibits.

I checked out the Tate Britain's Friday night a few weeks ago, and was super impressed. The museum had a really great mixture of art and lifestyle on display, in a bunch of media. There was a film shown on a huge screen at the end of the main gallery; photographs were projected on a marble wall in a central hallway, there were at least 3 cash bars, and tons of places to rest and chat. My favorite part, though, was a DJ booth and light show set up in a 19th century British painting gallery (cash bar too, of course). The juxtaposition of romantic landscapes and society women with hard beats and rotating lights, plus the scenesters striking poses to see and be seen, was one of the most memorable things I've seen in London to-date. I stayed for a few hours (and drinks), and will definitely go back.
posted by Danielle at 8:07 PM