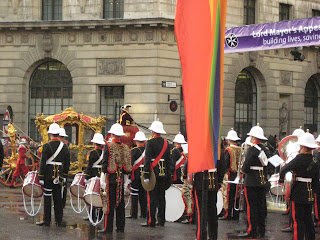 The Lord Mayor's Procession marks the yearly pilgrimage that the Lord Mayor of the City of London makes to pledge his allegiance to the Crown. The Lord Mayor is actually the honorary CEO of the Corporation of London. Remember the East India Company, the chaps responsible for setting up trade routes in the original 13 colonies? The Corporation of London was like that, before London became an incorporated city. The City of London is now the home of the city's finance industry, but was the original heart of the Roman city. The Roman wall is still visible in parts, and the history of London's birthplace is well documented.

So I braved the rain to watch the epic procession throughout the City; I saw some on TV and made it down to watch the conclusion. The parade ran the gamut of black cabbies dressed as Batman and Robin to artillery horses and drill teams. There were bands, Boy Scouts, the Territorial Army (Britain's National Guard), and youth groups. The procession culminated with the Lord Mayor returning to the grandstand in the most ornate gold carriage and fur robes. He reviewed the sailors' uniforms, received a salute, and ended the event. The pagentry was amazing, and pretty cool to see since America really doesn't have an equivalent... Inauguration has nothing on this.

Later on that night, I joined what seemed like the rest of London on the Embankment to watch the Lord Mayor's fireworks display. It was big, beautiful, and a bit short. It felt like a great send off to the fall, because it seemed like all of the city's Christmas decorations were put up the next day. There are pictures of the entire day, of course - click here.
posted by Danielle at 7:36 PM