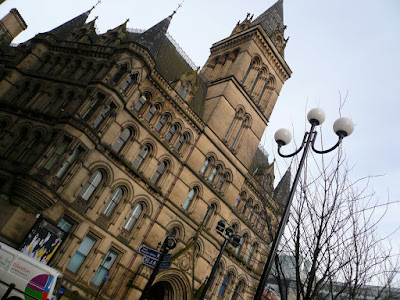 I spent the day yesterday up north in Manchester. The third largest city in England, it's a little bit over two hours northwest of London in Lancashire. It is the home of Manchester United, and Manchester City, (football teams) and I was sent on what I am calling a "strategic tourism" mission; I am working on a new project at work that requires developing an intimate knowledge of the heart and soul of the city. Given that my dream job is being a professional tourist, I gladly jumped at the chance to get on an early Virgin train and spent the day traversing the town.

Manchester, or Manchestah as it's said with a Manc accent, is an underdog city. It reminded me a lot of Philadelphia in that it has a strong civic pride in its industrial past, and is searching for a new identity in a digital age. Manchester's history is rooted in the industrial revolution and scientific advancement; it was the home of the textile industry and at one point actually produced 70% of the country's fabric (I went to a museum, obviously). The automated looms that allowed the textile industry to flourish were invented in and around Manchester, first atom was split in Manchester, and the periodic table of elements was developed there. But it is also famous for recent cultural events - its downtown was bombed by IRA bombers in 1996, and "Cool Britannia" poster boys Oasis epitomize the city's gritty swagger.

I went up to Manchester with the design director on my project who went to uni there - the University of Manchester is a top-rated school and the city has several other colleges and universities in and around it, also like Philadelphia - which was brilliant as he took the lead and followed his nose around his old stomping grounds and I got to just follow along. The city is so small, like Philly, that you can traverse it easily and we got to see pretty much every neighborhood. There are amazing little pockets of youth and hipster culture in areas like the Northern Quarter, as well as some truly hideous tourist traps like the Printworks. Manchester has its own version of the London Eye; the man in the tourism office told us that on a clear day you could see all the way to Wales from the top (my companion asked me rhetorically why anyone would want to see Wales, but that's another blog entry).

One of the stereotypes of Manchester, and the north in general, is their friendliness compared to "Southerners" and their strength. Walking around the city, residents were kind, willing to chat and answer questions, and much more open and effacing when compared with the cynical wariness of Londoners. But they also all looked old before their time, weathered by the cold and the history of hard labor. Even though many of industrial factory jobs have gone, the economy in Manchester hasn't replaced them with white-collar positions. The people in Manchester have an air of resignation to them, like they've seen it all before, and nothing is going to change, so they're just going to go down the pub. Which they do a lot. But Manchester is also one of those places where people walk down the street and know all the people they pass, and stop to have a chat. It's a big small town.

So after walking around for eight hours, photographing every inch of the place and taking occasional pint breaks (well you know, it is the best way to get to the heart and soul of a British city), I got back on the train to return to London. I shared the carriage with a Mancunian hen party. In some ways, that group of ladies cackling typified Manchester – tough, dressed a bit, well, over the top, they were on their way down to London for the weekend to have a good time. But their home was Manchester and they were proud to be from there, and I suppose that's the point.

Pictures are coming... I just haven't taken them off my camera!
posted by Danielle at 5:57 PM