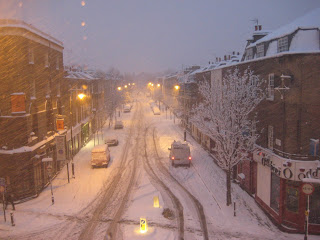 The BBC was calling a Russian weather system that hit southeast England last evening and continued on through this morning an "Extreme Weather Event" - it dropped 20 cm (7.8") of snow on London and the surrounding countryside. Apparently London hasn't had this much snow in 18 years! It's still snowing at 8:25am as I write this and even though my first instinct is to call it a Snow Day (read: under duvet on couch reading with coffee), my work email is being spazzy so I need to go to work. But at least I just need to put on 2 pairs of socks and my new snowboots; travel around London by mass transportation is horrendous. If you thought New Jersey couldn't handle snow, check this out:
- no buses AT ALL
- most Underground lines experiencing SEVERE DELAYS
- major highways closed
- London City and Luton airports closed; Heathrow and Stansted only have 1 runway open, unclear what's going on at Gatwick

People are still walking though, using umbrellas and wearing wellies. Though most might complain, personally I say its long overdue! Apparently, there is another weather system coming over the Channel from France tonight to add to the mess, and potentially more snowing due on Thursday. Picture above is from my bedroom window at 7am this morning.
posted by Danielle at 8:22 AM