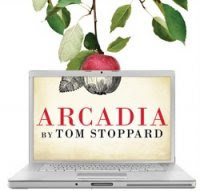 Thursday night the Irishman and I had the distinct privilege of seeing Tom Stoppard's play Arcadia at the Duke of Yorks Theatre. I am a huge fan of Tom Stoppard, having read Rosencrantz & Guildenstern are Dead in high school and obviously loved Shakespeare in Love. Arcadia has been open since May, and closes while I'm on holiday, so I was aware I had to get a move on to get the tickets but they were in the £50 per seat range; last week, a colleague sent an all-office email saying she couldn't use her tickets and would sell them at a discount so I jumped at the chance.

Tom Stoppard writes witty plays that are full of wordplay, innuendo, and clever crafting. Arcadia is, I think, one of his most British plays, gently poking fun at English traditions like period costumes, country estates, gardens, and random eccentricities. He centers this cultural exposé on one genteel country home during two significant points of time: a chance visit by Lord Byron while a teenage math prodigy works out the ways of the world, and three modern-day scholars trying to understand their rational roles in an irrational time.

The very practical and left-brained engineer Irishman loved the play, and I was thrilled to be able to see such a wonderful production of it (full of very talented actors) as well as to go to a West End production. It's easy to forget that London has some of the best theatre productions in Europe, because there is so much else going on in the city; after Thursday, I've decided to make it a point to remember.
posted by Danielle at 10:18 AM