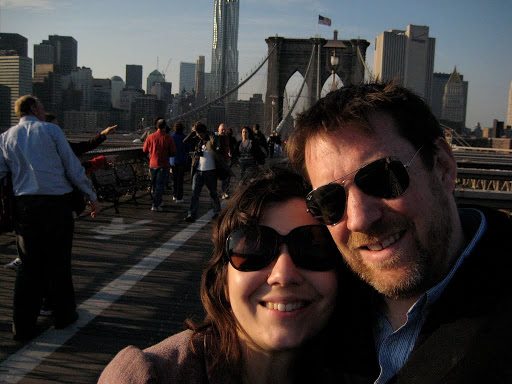 When last I posted, I was in Cincinnati (technically, Mariemont) with my friend Sloane who gave us a guided tour of the city and its environs (including northern Kentucky). Our eating tour of the US continued with ice cream at Graeter's and sauerkraut balls at America's first Hofbrauhaus in Newport, KY. We had a really relaxing and lovely time in Cincinnati catching up and taking it easy before driving up to Columbus.

On our way to Columbus, we spent a few hours at an outlet mall where The Irishman single-handedly boosted the American economy at a JCrew factory store. For a man who hates shopping, he certainly did a great job with it throughout our trip – I think he bought more than I did! When we finally did make it to Columbus, we spent the weekend with The Irishman's longtime friend and his wife and 9 month old baby. Again, it was a relaxing visit with good friends; the boys went off and did stuff while us ladies got mani-pedis (while the boys took the baby!). We cooked at home mostly, and invented a new cocktail called The Bensonhurst. We even roasted chestnuts over an open fire, a first for me, and I was pleased when I went to Waitrose yesterday and saw sacks of chestnuts on sale for the holiday season.

We then flew to New York for two whirlwind days of friends, sightseeing, and fun. We spent a day in Brooklyn where I showed The Irishman my old 'hood, the Italian coffee roastery where I used to buy my coffee beans (of course I bought some to bring home), and then went down to the base of the Brooklyn Bridge to stand in line for Grimaldi's Pizza. With very full bellies, we then strolled across the bridge. We had a amazing weather for most of our trip, and that day was so warm and sunny that we very nearly walked the bridge in our shirtsleeves. While in New York, I visited my lovely hairdresser Paul for a haircut and left the city with a spring in my step, feeling fabulous.

The rest of our trip was spent in New Jersey at my parents' house, relaxing and eating. It was really lovely, but also odd - I had to keep reminding myself that though we've been dating for 2.5 years, The Irishman has never been to the house where I grew up. So we walked in and I sat down and realized oh, maybe I should give him a tour! Show him the embarrassing pictures of me that are strewn around the house! Point out the deer in the backyard! It was pretty weird but also really sweet; he said he has a much better understanding of me now that he's seen where I was raised. Beyond the "This is Your Life"-style tours and two Thanksgiving dinners, we spent some money at the mall on Black Friday (The Irishman's first!), wandered around Princeton (where we ate more pizza), kibbutzed with my grandmother, and strolled through New Hope, PA.

Our vacation was so long, yet so segmented, that when I woke up on Saturday and had to pack, it really felt weird. It felt like I'd moved back, somehow, and the flight back to the UK was difficult for the first time since I've been abroad. I think I just sort of slipped back into my old routines and behaviors that it was almost surreal to leave. But if nothing else, the visit home made me really give Thanks for all of the wonderful people and all of the amazing experiences I've been able to have in my life. And I think for the first time I really do understand just what makes Thanksgiving such a special holiday. I was so glad to share it with The Irishman this year, and I think he was glad too.
posted by Danielle at 10:49 PM