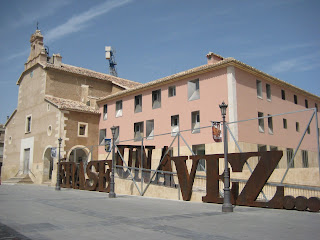 So after 5 days of Indian buffet, dancing, and sightseeing in Chicago, I endured a typical O'Hare flight delay and successfully got to Cleveland to make my overnight flight back to London. Once on the ground at Gatwick, I hopped on a shuttle to take me to the South Terminal for my flight to Alicante, Spain and my 5 day vacation visiting Jon and Ana.

People kept asking me where in Spain I was going, and I couldn't really answer. I'm sure Jon told me about a million times where he and Ana live but I never remember, and Jon told me to fly into either Murcia or Alicante. So when I arrived, Jon informed me that they live in neither Alicante or Murcia but Cieza, a small city in the region of Murcia and about 100 km northeast of the capital city of Murcia. Cieza has a population of about 40,000 and is easily walkable in less than a day. I spent most of the time there, with side trips to Jumilla (farther north into Wine Country), Murcia, Cartagena (old Roman city), and two days down at the shore in La Manga. The whole time, it was hot... 40-45 degrees Celsius. I don't know what that is in Fahrenheit, but it's hot. I sweat more this past week than ever before in my life.

Ana and Jon both bent over backwards to show me the region, despite having to work while I was there. I was very happy to sit at a cafe drinking a cafe con leche while they worked the morning, and meet them for lunch and siesta and sightseeing in the afternoon. Ana grew up in Cieza, and I was privileged to meet her family in the campo (countryside), in the town of Cieza itself, and to stay at her parents' shore house in La Manga, as well as meet her friends. I was also treated to some of the most amazing food I've ever had - snails, octopus, a dozen different kinds of sausages, freshly picked peaches, and of course, paella.

One of the best parts of the trip was the fact that every Spaniard I met thought I was Spanish; mothers and grandmothers all said I looked Spanish, my features were Spanish, and were disappointed I didn't speak Spanish. My Syrian Jewish family thinks our ancestors were pushed out of Spain during the Spanish Inquisition, and after hearing how Spanish I look, I guess its possible. All of the old ladies I saw looked like my Syrian grandmother and great-aunts and cousins, and even some of the food I ate reminded me of the vegetable dishes my grandmother cooks. I am really interested to now do research into Jews who left Spain in 1492.

Pictures of my trip are here... enjoy!
posted by Danielle at 8:31 PM