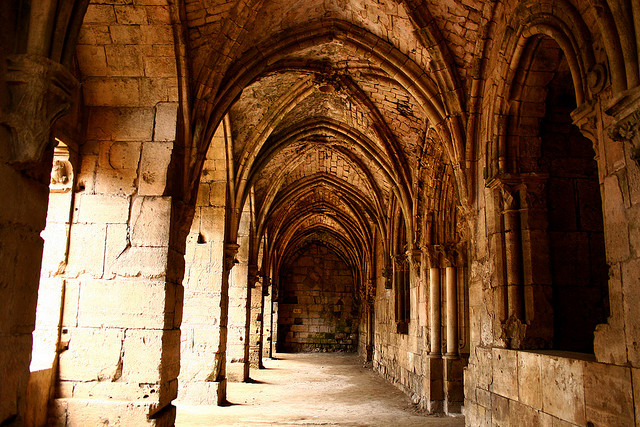 One of the downsides to accepting my new job is that I've had to accept less holiday allocation in my first year of employment than I have with my current job. Americans will grunt at me with this, given that I currently enjoy 27 days of vacation each year, but the change is significant; I'm looking at potentially having only around 16 days of holiday for 2011. Ouch.

Of course, being me, I spent January with a spreadsheet counting up holiday allowance for both myself and  The Irishman and listing out all of our obligations: wedding in April where I am a bridesmaid, wedding in France over the August bank holiday, week in Bordeaux for a family thing with The Irishman's family, a couple of days in October for the Dublin marathon, the 3 days you need for the week between Christmas and New Years. And after all that I was elated to see we had enough holiday for me to realize a lifelong dream: going to Syria.
I mention my grandmother in my "About me" blurb, but she is my inspiration for Syria. She is first generation American of Syrian-Jewish descent; her people were from Aleppo, considered one of the jewels of the Middle East and one of the places that may have the best cuisine of all the Arab states. She, her siblings, and cousins of the same generation have never been to Syria. It's never been safe enough for practicing Jews to go. Fast forward to now, and The New York Times has been writing up Aleppo and Damascus as undiscovered tourist hot-spots for the last couple years. Ever since I was in New York I was planning to do this pilgrimage of sorts, especially so that I could take some old Arabic paperwork we have in the family to have it translated and see what I could find out about the life my ancestors might have had. I really wanted to do this sooner rather than later, so that I could share my trip with my grandmother and give her a glimpse of her own history.
While it wouldn't be The Irishman's first (or probably second) choice for a holiday, I got him on board by suggesting we do a proper two-week holiday by adding on a leg in Jordan to see Petra and go on a jeep safari in the desert. I had the whole itinerary planned and set, I have been following Syria blogs like WhySoSyria and this chick traveling around the world who just left Syria, and we were both getting really excited. We decided to go in June, as the weather windows for tourists are April-June and October, and we had no other time with all of our other commitments. Then we were just waiting on my job situation before confirming all of the arrangements.
And then: devastation. I wanted to be completely above-board with my new company with my travel plans and while they were fine with a 2 week holiday, apparently June is going to be a particularly hard month for my new project and not the best time for me go away. Plus I'm on a 3 month probationary period from my start date (pretty standard in the UK) so it's not too great for me to take a ton of holiday during that time. As I spoke with the HR director, it became increasingly obvious that my dream holiday in June just wasn't going to happen.
So I have 2 options:
1. Go to Jordan and Syria in 2012 (so far away!)
2. Go to Jordan and Syria in October (and NOT run the Dublin marathon, forfeit the £80 entry fee and take up to 10 days unpaid leave)
I know in my heart of hearts that option 1 is the most sensible route, especially given the protests in Egypt right now that could very well spill over into Jordan and other neighboring states, but let's just be honest and say IT BLOWS. I had my heart set on going to Syria for so long that I honestly don't even know where ELSE I want to go on holiday this year with the few spare days I do have! Any suggestions? Honestly, this really is such a big setback not only for me but for Mom-Mom. It was just her 83rd birthday on Tuesday (Happy birthday again!!!) and while she's fit as a fiddle and as fiesty as ever, I had to tell her this sad news and instruct her not to go anywhere anytime soon.
I'm giving myself the rest of this week to wallow in this disappointment, and then I'm going to be officially over it. I promise.
posted by Danielle at 8:41 AM