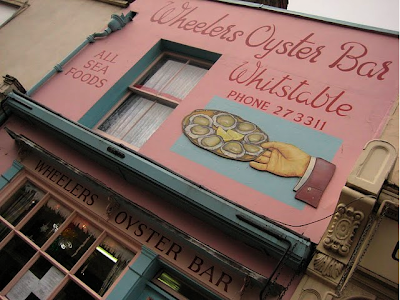 Ever since I read this article in the New York Times, I've wanted to go to Whitstable to feast on its treasures from the sea. So when The Irishman and I decided to spend a quiet New Years in London I thought this would be a great opportunity to finally get out to the Kent coast.

An easy 1.5 hour train from Victoria deposited us a 5 minute walk from the Whitstable high street, which we strolled along until we hit the harbor. Unfortunately being a Sunday of a bank holiday weekend most of the shops were closed but we got to see some of the town's famous alleys and historic buildings. Whitstable wants tourists and their website offers a lot of information about the town's history, culture, and part in the fishing trade. 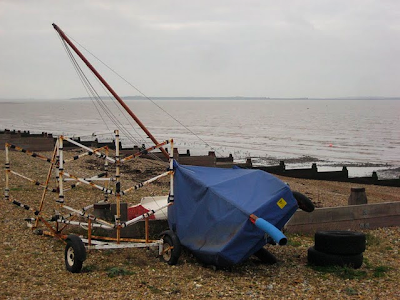 At the harbor, we were tempted by a fresh seafood bar but held off as we had highly anticipated lunch reservations at the Michelin-starred* The Sportsman gastropub 4 miles up the beach. After wandering and exploring for about an hour, I changed into my wellies as our plan was to walk to the pub. The temperature was around 2°C and it was perfect for a beach walk; I collected a lot of sea glass and shells, and marveled at the beautifully painted beach huts along the coast. 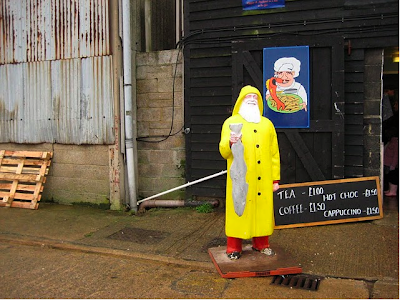 An hour later we arrived at The Sportsman and I must say it was one of the nicest meals we've had in a really long time. Sat in front of a cosy fire, we indulged in really amazing fresh seafood: The Irishman's starter of pickled herring and salads was phenomenal and I was so jealous, while my curried parsnip soup was a bit heavy – there was just too much and I would have been happy with half as much. But my ray and cockles main was buttery heaven and my dessert of warm chocolate mousse with salty caramel was unbelievable. Three hours later, we rolled into a taxi to get a train back to London not quite believing we'd had such a lovely feast in such a comfortable, relaxing environment. 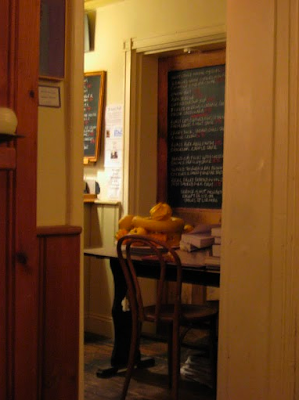 After wanting to visit Whitstable for nearly two years, I wasn't disappointed by what I found. I'd highly recommend Whitstable for a day out or even a weekend away; it's an easy trip with a lot to offer, and apparently they have an oyster festival in July which seems like it could be so much fun. If you like the sea, and seafood, and small English towns with cosy English pubs, then go go go! If you'd like more pictures, look here.

*Unclear as to whether The Sportsman still has a Michelin star - I can't find anything on their website that they do but the NY Times article mentions that they did have one in 2009... either way, the food is absolutely fabulous and so not pretentious that it shouldn't matter.
posted by Danielle at 11:34 AM