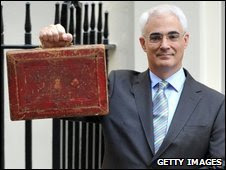 Today was Budget Day. Alistair Darling, Chancellor of the Exchequer, went to 10 Downing Street to present the UK budget for 2010. He held up a ratty looking red briefcase containing The Budget and then presented it to Parliament. Or something like that. It was a really big deal, and all of the newspapers and news broadcasts went on and on about it. After it was presented, people called into tv and radio shows, and posted their comments about it online, mostly to the tune of "this is ridiculous I should go on the dole."

I wondered why people in the UK got so wound up about The Budget, and someone at work helpfully pointed out that in the UK all taxes, benefits, and economic stuff is decided universally at a national level. So all of the decisions made on the back of The Budget directly affect UK taxpayers (like me!).

This of course is completely different from how it works in the US, which is to say that I know there is a budget for the US, and that Congress approves it, and sometimes when they don't the entire government shuts down for a few days, but that's about it. If Obama passes budget cuts for a certain segment of the population, by the time it filters down to paychecks it is about $20. People in the US are mildly more interested in state and county budgets because those budgets more directly affect property and income taxes.

But at least in the US we don't use a ratty old briefcase that's probably as ancient as the London Wall to carry our budgets!
posted by Danielle at 8:56 PM