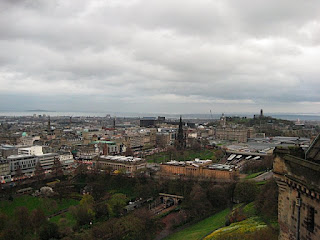 If you read below, you'll know that last weekend I went to Edinburgh to meet my family at the beginning of their holiday in the UK. I'd never been to Edinburgh, or Scotland, for that matter, and I was extremely excited to see that part of the UK.

I flew up on Friday, delayed significantly because London City Airport was fogged in (which was a shame because when the weather is nice, LCY is the best airport ever - no lines, plush waiting room, and 5 departure gates!) but when I arrived in Edinburgh the sun was shining and it was a lovely day. I took the bus from the airport into the city center, which was only 25 min and £3 if you buy a roundtrip ticket - I highly recommend it - and went to my hotel to drop off my stuff before meeting the folks.

The rest of the weekend was a whirlwind of sightseeing. We went through the Real Mary's Close, toured Edinburgh Castle, took a bus trip out to Stirling Castle and the Trossachs national park, and of course hit some pubs along the way. My mom had her first shandy and proclaimed the ale shandy far superior to the lager shandy, and my brother entertained me with beer foam mustaches. Dad was happy to sit and eat pistachios with his pint.

While we were in Edinburgh, we went as a family for a special meal at a restaurant recommended by my Scottish friend Ross. The Witchery is a lovely restaurant right near Edinburgh Castle with an excellent menu and really amazing ambiance - it is located in two parts - the Secret Garden and the regular Witchery dining room - and is part of a very cool hotel as well. We ate some really wonderful food by candle light, and the only thing I would have done differently is not book it on the night my family flew in - they were so jetlagged that towards the end of the meal I couldn't tell if some of them were still awake.

Finally, one of the highlights of the trip (for me) was witnessing the haar, the sea fog that envelopes the city sometimes. We went into pub and it was clear, and when we came out an hour later the city was blanketed with a dense white fog. You can see my pictures of the haar and the rest of the city here.
posted by Danielle at 9:26 AM