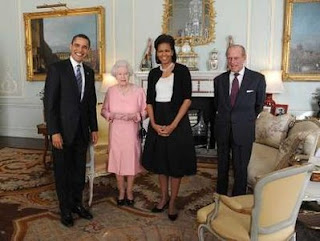 It's all the newspapers can crow about this week - America's latest super couple have descended upon the British Isles. No, not Brangelina or Tom and Katie: President and First Lady Obama are here! They are staying in London! In the Ambassador's residence! They are having breakfast at 10 Downing Street! What will Obama say at the G20?! WHAT WILL MICHELLE WEAR?! Politicos and fashionistas alike are beside themselves, hoping to catch a glimpse of this 21st century, credit crunch power couple.

Meanwhile, the rest of London is on lockdown because of the potential anarchy of the G20 protesters. I live and work sort of near The City, but don't expect to see much of anything; bankers and lawyers who work in the Square Mile and Canary Wharf were told to dress down in jeans and avoid carrying laptops so as not to be noticed by the crowds.

Honestly. What year is this? This is such 2001 behavior. And yet, look around - the 90s are back in fashion (along with the choicest bits of the 80s), the Dow and FTSE are at their mid-90s levels, and societal angst and uncertainty is certainly more akin to what I felt in high school than what I've been living for the last decade.

Maybe that's why Britain - if not the rest of the world - is so obsessed with America's First Couple. They're not just a well-spoken man and his well-dressed wife; they are the world's only chance to get us out of this big, fat, old-fashioned mess.

Followup: check out The Guardian's review of the First Spouses at the G20. Hilarious and enlightening.

PPS: Mrs O met the Queen!!! Picture courtesy of Reuters.
posted by Danielle at 8:24 AM