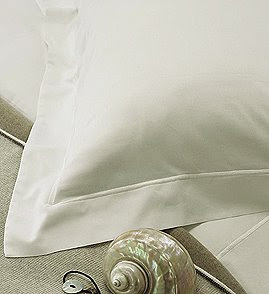 It is officially 1 week until I move into my new apartment. I cannot WAIT! I don't think I've ever anticipated the passing of 7 days so strongly before.

In preparation for moving, I've started acquiring household goods and necessities. Obviously "necessities" means "needs" and maybe I didn't really NEED the tea towel (dish towel) that has the words "I had a very nice dream about Daniel Craig" printed on it, but surely it will make my new flat a home. But really, the one gross expenditure was on luxury organic cotton bedding.

Let me preface this by saying that for the past eight years, I've been sleeping on the same three sets of sheets and using the same four towels in rotation. Even my mother, the thriftiest of homemakers, questioned the absorbency of said towels and my father noticed that all of them were unraveling at the edges. The sheets were a combination of sale items and a set that my mother bought in 1975 designed by Princess Grace of Monaco. BEFORE she died.

These facts, coupled with the very harsh reality living in the outskirts of town for the last six weeks, led me to justify spending the most exorbitant sum of money that I have EVER spent on myself, on bedding. Don't think I didn't consider other options; I went to the posh linens store and touched all the samples, then walked down to Oxford Street and went to John Lewis and Debenhams, the nicer department stores, and fondled their linens. There was no contest. Once you know what camembert tastes like, why would you eat string cheese?

It physically HURT to hand over my credit card to the shop girl. I was NAUSEOUS while signing my name on the slip. But back in the office on Monday, I submitted my expenses and it all went away, replaced with the anticipation of getting into the nicest bed ever on the evening of 18 June. Sigh.
posted by Danielle at 3:36 PM

Email ThisBlogThis!Share to TwitterShare to FacebookShare to Pinterest
Labels: I hate moving, London