My one month anniversary 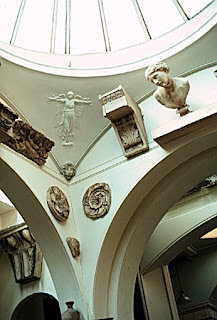 Yesterday, June 3, was my one-month anniversary of my arrival in London. One month is not enough time for me to start writing dates "3 June" instead of "June 3" - old habits die hard.

To celebrate my anniversary, I took myself on a date to the Sir John Soane Museum. The Soane was recommended to me by one of my favorite people in New York, and on further investigation I realized I studied it briefly in graduate school. It is a house museum of an 18th-19th century architect and city planner who was responsible for major development in London. He was also an avid collector of antiquities and objets d'art who displayed his collections in a specific, if somewhat nutty, method of organization. As a former colleague put it, visiting the Soane Museum is "like a visit inside someone’s brain." I found out that every first Tuesday of the month, the museum is open from 6-9PM and lit by candlelight.

I arrived at Lincoln's Inn Fields at 6:15PM and proceeded to stand in line in the sometimes steady rain for about an hour and half, sandwiched between two goths and two yummy mummies. Once inside, the house is amazing. It remains unchanged from when Soane was alive, and it's fascinating to think about him collecting all of these objects and hanging them in his specific manner. The strategically placed pillar candles illuminating grotesque and gorgeous objects was a great plus. I didn't spend much time in the museum, as it was crowded (they only allow 50 people in the house at once, and I can see why - the passageways are so narrow and the doorways so tiny that even with ten people inside it feels tight) and the lighting was so dim one couldn't examine any of the objects adequately. I highly recommend the evening viewing, though, if only for the atmosphere and mood. I'll definitely go back during the day for a proper visit.

After the Soane Museum, I treated myself to dinner at a Thai restaurant around the corner, which was disappointing and expensive. Despite the poor food, however, it was a pretty great anniversary date.
posted by Danielle at 9:30 AM