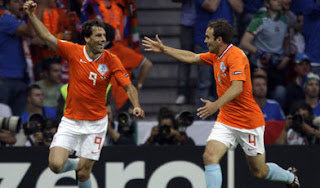 Like I mentioned before in this space, there is always The Football going on in England; whether it's in the form of the regular league play, championship league, finals, or European games, there is nearly NEVER a time when there isn't some sort of professional football being played.

Currently, everyone is getting all fired up about the Euro Cup. This year's Euro Cup was controversial before it even started because England did not qualify, and the major players all went home to play for their home teams while England had to make do with "friendly" matches against fellow losers like Team USA.

I actually like the Euro Cup. I think it's more fun to watch countries play against one another and to see people get all worked up about their nation, as opposed to a club team. Just because England isn't playing doesn't mean the Brits aren't watching the action; in fact, I think they're more into it because they can trash talk more since they have no skin in the game.

I myself have torn allegiances; being a life-long Francophile, I naturally want to support Le Bleu. But working for a Dutch company, and learning so much about them and their culture from both my clients, makes me also side with the Orange. Plus, Rietje, my friend from college, is Dutch, and during the last World Cup she and I ducked out of work to watch the second halves of the Dutch games during the semi-finals. I even made us orange t-shirts that said HOLLA(nd) to wear so we could show Dutch pride. I'm currently a little sad that I gave mine to Rietje for her younger sister to wear; I would TOTALLY rock it at the pub!

What it comes down to, I guess, is the fact that the French are playing horribly thus far in the tournament, and the Dutch have come from out of nowhere to play amazingly and win their first two games in major upsets. I watched one of those games on Friday, against France, and it was unbelievably exciting. So I guess from here on out, I have to put down my wanna-be Gallic pride and side with Orange because they are currently the team to beat!
posted by Danielle at 11:38 PM