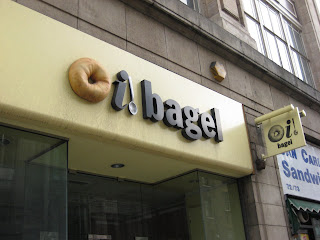 I know there is a word for when a word has two different spellings and meanings, but sounds exactly the same. I don't remember what it is, but I'm sure it will come to me later on tonight at the pub. In any case, one pair of those words that has inoffensive connotations in both American and British English is OI/OY. You all remember Bridget Jones yelling "Oi! Oi oi!" to get people's attention in Bridget Jones's Diary; in the UK, oi is kind of like "Hey, hey you there!". Whereas in the US, especially on the East Coast and in urban areas with lots of Heebs, oy is more of a lament... usually in the form of "oy vey, oh my gawd, my feet hurt so much you'll never believe." In any case, it's fitting then that this (now defunct) bagel shop was called Oi Bagel. Insightful!
posted by Danielle at 6:00 PM

Email ThisBlogThis!Share to TwitterShare to FacebookShare to Pinterest
Labels: Signage